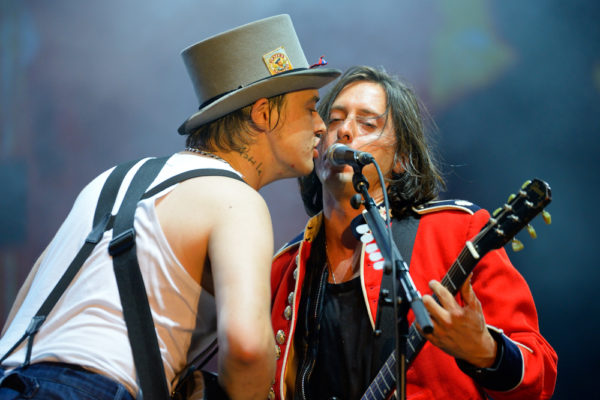 The Libertines have been named as the shirt sponsors for their local football team. That’s Non-league team Margate F.C. who will have the band’s logo across their shirts this season. Doherty and co are currently setting up a hotel and recording studio in Margate and have become somewhat involved in the local community over the last few months. There’s pics of the kit below…

The 2018-19 season kicks off today and The Libertines’ logo will appear emblazoned on the team’s home and away shirts as they compete in the Bostick Premier League. Deny Wilson, Margate F.C. General Manager said of sponsorship: “We are thrilled to share the news that The Libertines will be our shirt sponsors this season. It’s a pioneering partnership and one we firmly believe will be a huge hit with supporters at Hartsdown Park, residents across Thanet, and music fans across the world.”

Wilson also mentioned that the band and football team had a “series of exciting things lined up.” “We truly believe we can work together to help showcase Margate to as large an audience as possible. We look forward to welcoming the band to watch games and there’s no doubt they’ll get a warm reception from fans.”

The Libertines also commented on the venture, “were getting very nicely settled into our new home by the seaside… opening our hotel, curating our Sharabang, and now delighted to be partnering up with local heroes Margate F.C. as their official shirt sponsor for 201819! Feeling very honoured to be part of the magic of this town. See you out there.”

As mentioned by the band, they will curate one day of the upcoming Wheels & Fins Festival, which takes place in nearby Broadstairs between September 7-9. The Libertines have handpicked the acts for the final day of the festival, dubbing their takeover “Sharabang”. Carl Barat and Pete Doherty’s group will headline the mini-fest and have chosen the likes of Echo & The Bunnymen, Reverend & The Makers, and newcomers Lock to appear alongside them.