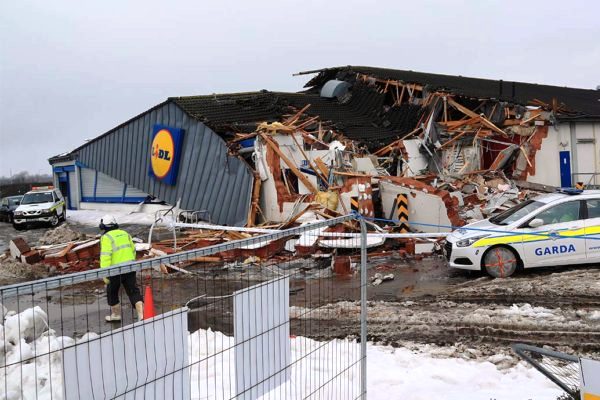 Lidl has confirmed it plans to demolish what’s left of its Fortunestown Lane store in the interests of health and safety.

A team of engineers and consultants has completed their assessment of damage caused to the building during Storm Emma.

Lidl, which had been planning to build a bigger store on the site, says it has yet to make a final decision on future plans.

The supermarket chain has also announced it will be offering customers a complimentary shuttle bus service from Fortunestown to its next nearest store at Whitestown Way.

Another man has appeared in court after a Lidl supermarket in Tallaght in Dublin was looted last Friday during the snowy weather.

26 year old Liam Walsh of Ard Mor Drive in Tallaght is accused of handling 14 hundred euro worth of stolen items from the store, after they were allegedly found in his home.

The court heard he denies the allegation. The dad of one, who was the seventh man to be charged in connection with what happened, has been remanded in custody.

In a statement this afternoon, Lidl Ireland said: “Based on their recommendations, we have made the decision to demolish the remainder of the building in the interests of health and safety.

“At present we are yet to make a final decision on future plans for the site.” The retailer had been planning to build a bigger store on the site before Friday’s incident.

The service will run once a day from Friday 9th and the 40 seater bus will strictly operate on a first come first served basis, designed to help our regular customers who aren't able to travel.