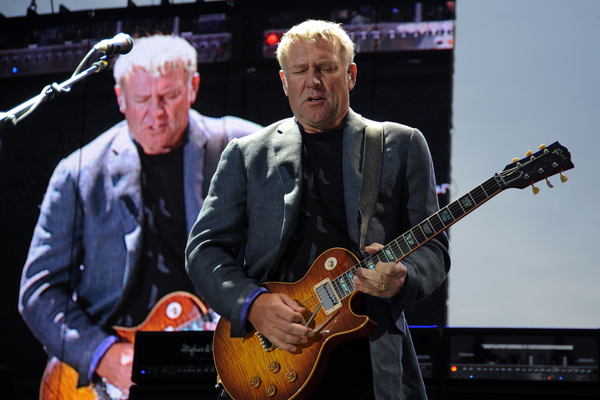 Rush guitarist, Alex Lifeson is set to release his debut album with new project, Envy of None, with Maiah Wynne on vocals and bassist Andy Curran. In celebration of this amazing feat, Lifeson – in collaboration with Epiphone – is offering an Alex Lifeson Axcess Standard Signature Les Paul to one lucky purchaser of the album.

Through the use of a QR code printed on s ticket, fans can enter for their chance to win the guitar giveaway if their album includes a ticket. One CD in a deluxe edition of the self-titled release will hold a Willy Wonka shtyle ticket, much like Roald Dahl’s 1964 novel. The lucky winner will have their very own Les Paul and will be able to rock out like the iconic Lifeson.

See the guitar and listen to Envy of None’s Liar toward the bottom of this post. Retailing at around $899, the Alex Lifeson Axcess Standard Signature Les Paul comes in a Viceroy Brown finish with Epiphone Ceramic Pro neck and ProBucker 3 bridge pickups, with coil-splitting options via push-pull volume controls. An included Graph Tech Ghost Floyd Rose system has Ghost piezo bridge saddles.

Read the complete rules of the contest. Envy of None arrives on April 8; pre-orders are available now. Learn more about Envy of None on Twitter and Instagram.

This year, iconic, Canadian rockers, Rush are set to celebrate the 40th anniversary of classic album, Signals, along with the release of their official pinball machine. Lifeson also recently collaborated with Rage Against the Machine’s Tom Morello, and Metallica’s Kirk Hammett, on a Morello song called I Have Seen the Way.