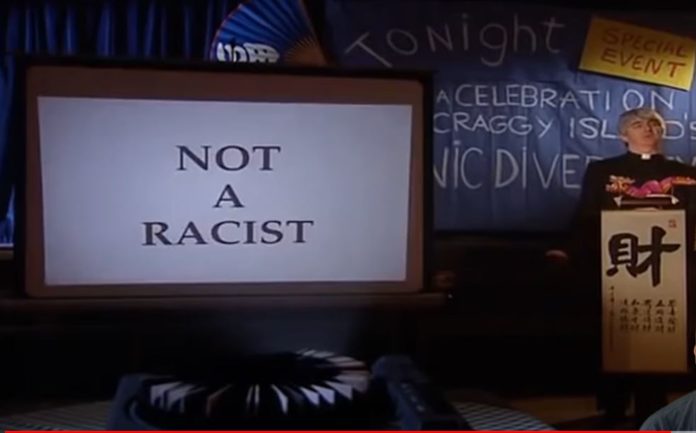 Graham Linehan is “disappointed” and surprised by Channel 4’s decision to add racism warnings before two episodes from Father Ted.

Linehan co-created the show with Arthur Matthews. But the show now has blackface and racial impersonation warnings attached to certain episodes.

The first warning is placed before episode 4 of series 1. In the episode, a priest is in blackface, pretending to be a member of the Supremes for a talent show.

The warning states, “This episode was made in 1995 and contains a scene of blackface which some viewers may find offensive. This programme isn’t suitable for younger viewers”.

The second warning refers to Father Ted Crilly (Dermot Morgan) impersonating a Chinese man. This was epsiode 1 of series 3.

The alert states, “This episode was made in 1998. It contains language and racial impersonation which some viewers may find offensive”.

“Once they start they can’t stop and it’s going to make comedy impossible”, Linehan told the Times. “You don’t get comedy by painting everything in a rosy light — you have to make fun of things and people. There’s so many warnings for everything now, it’s just never ending”.

Linehan also added that the addition of these warnings was “news to me”. He also said that by adding these warnings, Channel 4 have paid attention to the most “hysterical people in the world”.

In a statement, Channel 4 said, “We have carefully reviewed the principles governing how we handle historic programmes across our platforms. In light of current audience expectations, we have updated the viewer advice for certain episodes of Father Ted on All 4. No edits have been made to these brilliant and beloved comedy episodes and they remain available for audiences old and new to enjoy”.

Last June, Dermot Morgan’s son Don defended his late father and the comedy after some people on social media had called out these episodes to be racist. Other shows like Little Britain and Fawlty Towers were also accused of racism.

At the time, Don Morgan tweeted, “All my family have left of my father is his work and reputation. He abhorred racism of every type and actively worked against it”.

He continued, “Whilst insignificant compared to the suffering and upset of victims of racism, you might forgive me for feeling more than a little sad about this”. Check out the Tweet here.

As well as Father Ted, The Simpsons have featured in the news recently as actor Hank Azaria who voiced Indian shopkeeper Apu said that he felt the need to apologise for his participation in “structural racism” following his portrayal of the character.

Azaria said he feels he needs “to every single Indian person in this country and personally apologise”. The actor stepped away from voicing the character last year.