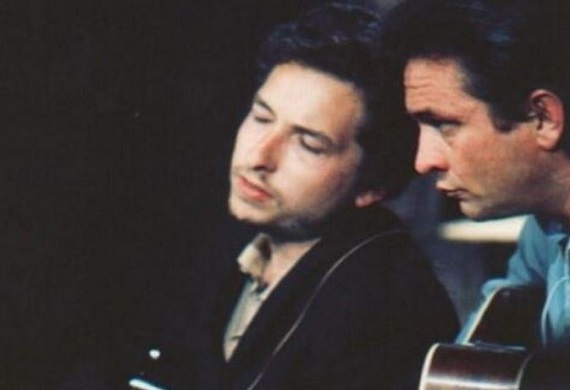 A recent release from Bob Dylan called “Wanted Man” is a fascinating taster of the Johnny Cash-related compositions that will feature on his upcoming box set Travelin’ Thru, 1967–1969:

The Bootleg Series Vol. 15. According to UCR, the original recording can be dated back to 1969 from a session a week after Dylan gave “Wanted Man” to Cash.

The first-take recording gives an example of a man not fully comfortable with the new material yet and its sounds like Cash still hasn’t gotten a full grasp on the song.

At the start of the demo, you can hear June Carter Cash advising her husband in a friendly voice: “Be sure that Bob puts the melody for that song, that ‘Wanted Man.’ You forgot the melody.”

But actually what she should have said was remember the words. Cash and Dylan start out on a  serious note, but then end up giggling when Cash can’t remember the lyrics.

However he eventually got it and Cash went on to open the 1969 live album at San Quentin with Dylan’s song “Wanted Man,” referring to him as “the greatest writer of our time.”

A studio version of Cash performing  “Wanted Man,” was later recorded by Cash and this became the title track for a 1994 compilation.

Other opportunities arose when Carl Perkins, the legendary rock icon was on hand for the oft-bootlegged Columbia Studio A sessions that produced the “Wanted Man” demo.

The material from Discs two and three of Travelin’ Thru focus on Dylan’s work with Cash, and also include an on-stage performance at Nashville’s Ryman Auditorium for the premiere episode of The Johnny Cash Show.

U2 And Kendrick Lamar Have A Song Together, Because The World...