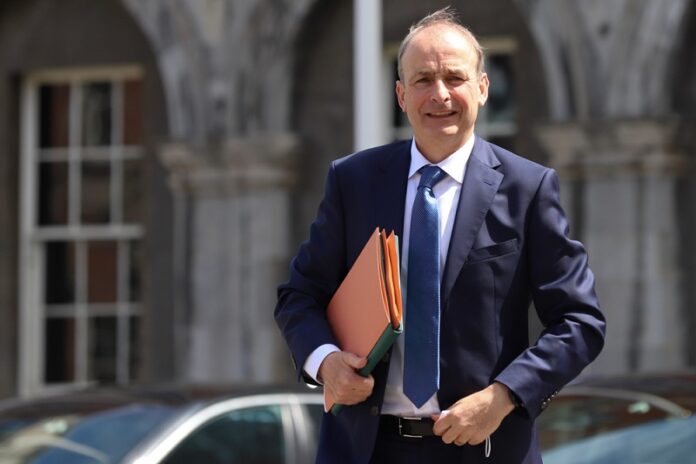 Micheál Martin has been accused of “making a show of himself”. This comes after he claimed that banks were not bailed out after the 2008 Financial Crisis.

The Taoiseach made the claim in the Dáil yesterday, when responding to a question from People Before Profit TD Richard Boyd Barrett.

In September 2008, the Irish Government issued a bank gurantee which led to €64 billion being borrowed from the EU and the International Monetary Fund.

TD Richard Boyd Barrett, was quizzing the Taoiseach on the issue of striking workers at Debenhams who have been made redundant.

He described the €3 million offer made by the Government for retraining as an insult, given that they found €64 billion to bail out the banks.

Boyd Barrett said to the Fianna Fáil leader, “The failure by this Government to ensure justice for these workers, is apalling”.

The People Before Profit TD continued, “I remind the Taoiseach Micheál Martin that he said he could not put money on the table because it would set a precedent”.

“The sum of €18 million is owed to the state by Debenhams. The Taoiseach did not mind setting a precedent when it came to bailing out the banks with €64 billion”.

TD Boyd Barrett added, “There was no moral hazard there or no worry about the implications, but when it comes to workers who have worked for decades, who have done nothing wrong. They are entitled to the two plus two, agreed with Debenhams and we cannot underwrite them”.

Recently, the Government has also been crticised over their handling of student nurses during the pandemic. See more below.

Taoiseach Micheál Martin was Minister for Foreign Affairs during this Brian Cowen led Government at the time in question.

The Taoiseach shocked the Opposition by denying that the bank bailout took place.

“The state took equity. The shareholders were not bailed out. This is not a popular thing to say. But it is a fact”.

“Deputy Boyd Barrett never wants to hear the facts because he lives in a fantasy economic wonderland. If his party ever got into power, thousands of jobs would migrate from this country. That is the reality”. See here.

After this exchange, TD Boyd Barrett stated, “I think it is one of the most bizarre claims I’ve ever heard in the Dáil”.

“He was trying to rewrite history because a Government he was part of effectively gave a blank cheque in order to bailout the banks and huge numbers of people paid a terrible price for that”.

The Taoiseach has been mocked for these claims. Sinn Féin leader, Mary Lou McDonald took to Twitter: See here.

“The banks were NOT bailed out sez  Micheal Martin”.