A man has incurred serious injuries following a shooting in west Dublin. The incident happened at around 5 pm.

Gardai and emergency services rushed to the scene on the Blakestown Road in Mulhuddart, Dublin 15.

It is reported that the man was shot in the stomach but his injuries are not believed to be life-threatening.

According to sources, the victim is known by the gardaí, and they suspect it could be connected to an ongoing feud in west Dublin. 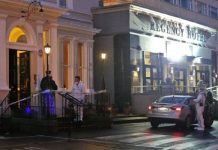