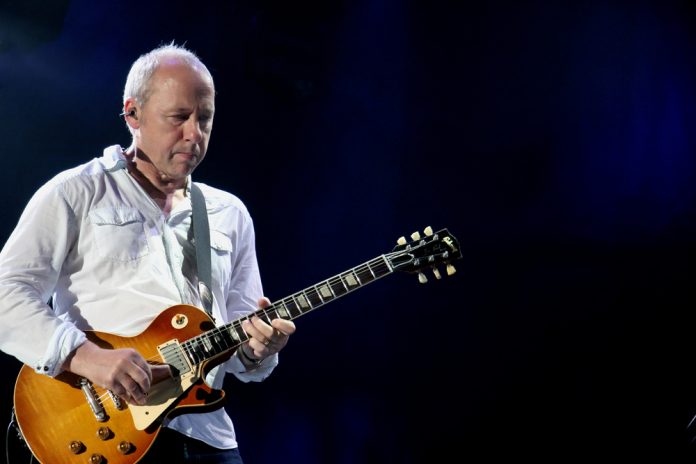 Mark Knopfler was always inspired to work with other artists and he has a vivid memory of wanting to work with Sting.

That was to employ his musical talents on Dire Straits’ classic song “Money for Nothing,” He said he never had a problem sharing the writing credits with the legendary Police frontman.

Brothers in Arms, the LP which features this track was released in 1985 and it is still regarded as one of the bestselling albums in history.

When Knopfler was working on the single, there was a famous “I Want My MTV” promotional campaign running at the time.

According to Ultimate Classic Rock Nights, Knoplfer explained how he got inspired to use Sting:

“I’d seen the Police doing an MTV advert, saying ‘I want my MTV,’ just saying it all together; and I thought, ‘If I set that to the notes of “Don’t Stand So Close to Me” it’ll work,’”

“I remember saying to the guys, ‘I’d really like to get Sting to do this.’ We knew them anyway because we’d done a lot of gigs together in Germany. One of them said, ‘That’s fine, because he’s here on holiday.” Knopfler recalls that it was perfect for Sting’s voice.

He added, “And because I’d used the five notes from ‘Don’t Stand So Close to Me,’ that’s how the co-writing thing happened, which is fine; it’s absolutely fine with me and it worked out well.”

“I remember quite clearly Sting coming into the studio and saying, ‘What’s wrong?’ I said, ‘What do you mean?’ He said, ‘Nobody’s fighting!’”

According to UCL, Knopfler was relieved that he was stopped in his tracks when it came to making the video. He had envisaged a kid sitting in his bedroom with the ‘I want my MTV’ thing happening and the camera rushing over the landscape.

He said it was good fate that he never got involved, as the final video may never have made it into the award-winning video that it was if he had interfered.

The video was one of the first to be created on a computer and Knopfler recalls it as something similar to a dream sequence, best left in the hands of someone else.