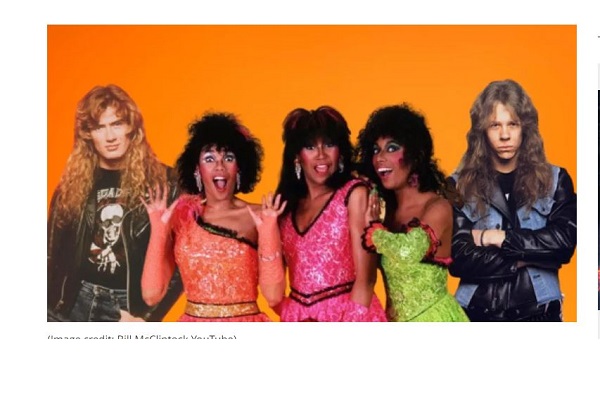 Bill McClintock, the music mashup specialist of YouTube is at it again! McClintock has merged the music of Metallica, Megadeth, the Pointer Sisters with Blue Oyster Cult.

This also not the first time that McClintock has merged music like this together.

Such artists also include Van Halen, Free and Quiet Riot. Other unique collaborations also include Motley Crue vs Motown, Metallica vs Huey Lewis and Slipknot vs Spice Girls.

It is fair to say not many people have wondered what it might be like to merge the music of Metallica, Megadeth, Pointer Sisters and Blue Oyster Cult.

But here you go. Check out Megadeth’s Symphony of Destruction, and Tornando of Souls, along with the Pointer Sister’s Neutron Dance, along with Blue Oyster Cult’s Godzilla.

The song features on his solo album Portals, which was released last week (April 23).  Hammett spoke about stepping out on his own, in releasing this solo album.

He said, “Usually when there is an album release — it’s the four of us [in METALLICA]. We all have each other’s backs. We are all supporting each other, because it’s kind of a nerve-wracking sort of emotional and mental thing”.

“Usually, during this time, we have each other to talk to about any sort of insecurities or whatnot. But now that I have put out a solo album, I am the guy who bears the whole burden of all that”, he also added.

“I said to James [Hetfield, METALLICA frontman], ‘This is weird. I have an album release and usually I have you three other guys. But it’s just me and it makes me feel insecure and nervous.’ And James only had one reply: ‘This is a growth and learning experience for you, bro.’ And I go, ‘Thank you for saying that because I didn’t see it like that”.