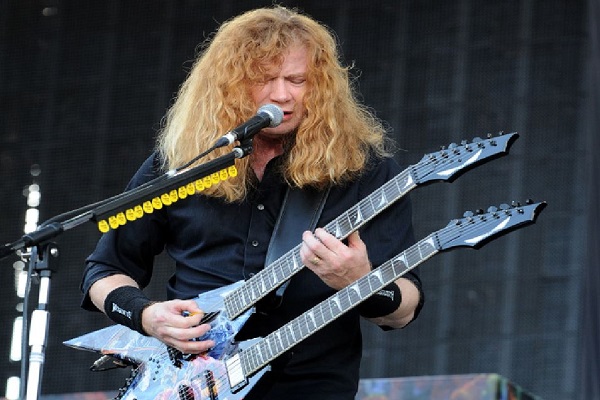 Dave Mustaine, Megadeth frontman has offered his first full interview since being diagnosed with throat cancer earlier in 2019.

Talking to Rolling Stone, he opened up about how he first learned of the diagnosis, and then the huge support he received from the metal community.

Mustaine discussed how first discovered how had cancer: “I was on tour, and I just had some dental work done when I was at home. My teeth are really, really, really sensitive, because I’m a redhead … It just felt like something was wrong in my tooth area.”

He continued, “So I see the oral surgeon, and he was such a cock. I was in the chair, and he looks at me and then he takes off. And I’m sitting there, and I’m waiting and waiting and waiting, and he comes back in and he goes, ‘It looks like the Big C.

“You need to go see an ear, nose, and throat doctor.’ I was just stunned with his bedside manner; he was just such a dick.”

So on the fields of battle, we are the chosen ones… pic.twitter.com/kUMp2chDqD

With regard to how dealt with the disease, Mustaine said, “I thought about every single trick that I had learned about healing my body and the things I’d learned from martial arts, and I did everything that the doctor said to a T, and hopefully this is the end of it and I never hear of it again. But I feel great.”

Mustaine admitted that he wasn’t officially advised to go on tour by his doctors, “Well, they didn’t say that.”

“But they’re freaking out over how well I’ve healed. I’ve got people around the globe praying for me. I take good care of myself, and I don’t know how anybody can expect any other outcome than this, knowing me. I never settle for anything but complete success or, in this case, victory.”

In the overwhelming wave of support Mustaine singled out his old Metallica bandmate James Hetfield. The pair’s relationship has been contentious since Mustaine was kicked out of Metallica in 1983, so the Megadeth leader was moved by Hetfield’s gesture:

“A lot [of support] came from people that I knew but I didn’t know cared. Most notably, I got a text message back from my old brother, James Hetfield, and I was so, so happy to hear from him.”

“Contrary to what anybody says and contrary to any of the act that we put on, I love James and I know that James loves me and cares about me.”

You can see that when the moment of truth is here and I’m telling the world that I’ve got a life-threatening disease. Who comes to stand next to me? James.”