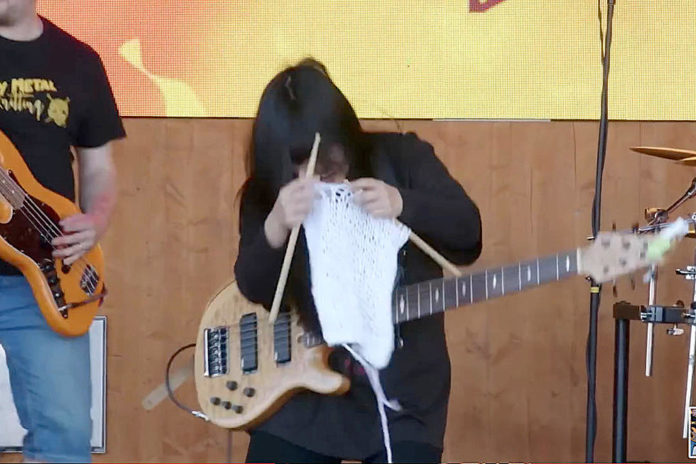 Finland. Once again crowned the happiest country in the world for the fifth consecutive year in the World Happiness Report 2022. So what do those happy Finns do to fill in their long summer days (minimum nineteen hours!)? Heavy Metal Knitting of course.

It’s a thing. An annual competition with entrants from all over the planet. The competition’s Facebook page explains: “In heavy metal knitting, needlework and music become united like never before. On the same stage…there’s heavy metal music and knitting ‘shaking hands.’ Knitting to the rhythm of heavy metal music can be compared to playing air guitar.”

Bit of a stretch but, OK.

The rules for the competition are fairly simple. Every group must have knitting needles held in at least one member’s hands for the duration of the performance, a proper knitting project must be on said needles, and actual knitting must be done at some point during the performance.

This contest has been going on for three years now, with this year’s championship last Friday in the Joensuu Market Square.

Bet you’re dying to know who won this year, right? The UK group ‘String Thing’ took out this year’s win, with the Scottish and Indian group ‘Woolfumes’ taking second place.
So, if you’re looking for a new hobby, love a bit of heavy metal and you’re a keen knitter, this could be just the thing for you. You’re welcome.