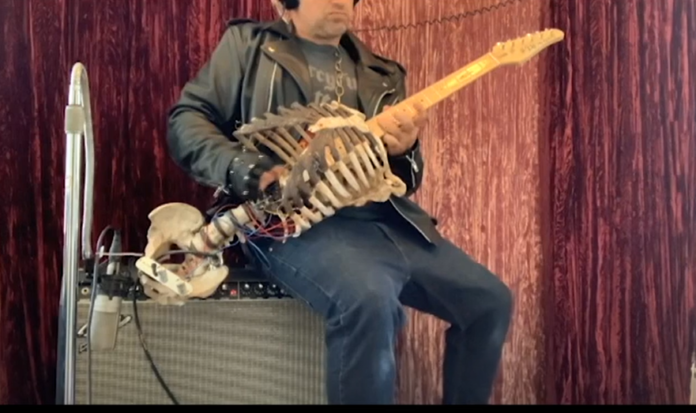 A Heavy Metal enthusiast who goes under the name Prince Midnight has paid trubute to his recently deceased uncle by fashioning a guitar from his rendered skull! Yes, you read that correctly!

He attached a guitar neck, pick ups, volume knobs, jack strings and electronic in the skeletal torso of his uncle. When you understand the context of Prince Midnight’s tribute, it is actually quite a wholesome touch.

Prince Midnight’s uncle Filip’s life was tragically cut short when he was killed in a car accident recently. Filip, like his nephew was also a heavy metal enthusiast. They are orginally from Greece, and their orthodox religion rejects cremation.

Filip’s body was subsequently donated to a local college to be medically prepared and rendered. It was also left to educate students for two decades.

The remains were eventaully returned to the family. Then, suddenly a lightbulb went off in Prince Midnight’s head, giving him an ingenius if not unorthodox idea, you might say.

Prince Midnight: “I decided to turn Filiip into a guitar”

Prince Midnight explained his idea, “So, I got the box of bones from Greece and didn’t know what to do at first. Bury them? Cremate them? Put them in the attic? All seemed like poor ways to memorialize someone who got me into heavy metal”.

He continued, “So, I decided to turn Uncle Filip into a guitar, which proved to be challenging. I did a lot of research and no one has ever made a guitar out of a skeleton. So, I did it. I started out consulting with two guys in Dean Guitars’ wood shop in Tampa but they got cold feet”.

Prince Midnight said he was proud of the finished masterpiece, paying tribute to his influential uncle in the process too.

“Anyways, now Uncle Filip can shred for all eternity. That’s how he would want it. I’m super proud of the project and how it serves to honor him, his life and his influence on me”.

You can see the guitar in action here.

How does it compare to the phenomenon of a Buddhist Monk doing rock covers?