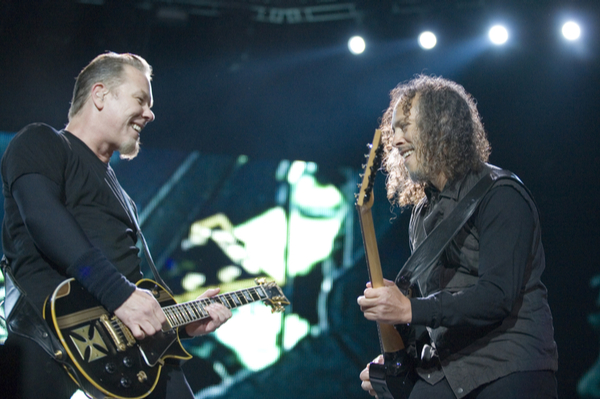 Metallica have joined forces with Vans for a range of new shoes to celebrate the 30th anniversary reissue of “The Black Album”.

Two limited edition designs on Van’s Classic Slip-On and Sk8-Hi are included in the collection. Both designs also feature artwork from Metallica artist Pushead. Pushead has also been providing imagery for the band’s stage and merchandise since 1986.

Both sets of footwear include silver Metallica branding. They also have a graphic blue shatter pattern and the brand’s name printed on the heel stay.

The collection which is available to buy here from July 25, also feature Pushead’s “Sad But True” design of facing skulls. The skulls can be seen on opposing sides of the Classic Slip-On, and on the quarter panels of the Sk8-Hi design.

The band had confirmed that “The Black Album” was to be reissued back in June.

The reissue will be released on September 10. It will include two albums.

The second one will see stars from around the music industry releasing covers of Metallica tracks from the album. The album contains 53 tracks. Artists such as Miley Cyrus, Elton John, Biffy Clyro, Weezer and Volbeat will contriute to this special album.

Find out more about this special reissuing of the album in Nova’s report here.

It was also reported recently that a mother from New Zeland had named her three children Metallica, Pantera and Slayer. Kiwi filmmaker David Farriar broke the news.

Farriar also went into detail about this via his Twitter thread. Check it out here.

“Proud to report that a new zealand mother has named her children metallica, pantera and slayer. she told me “it’s not easy raising three of the heaviest bands”, he tweeted.

He also added, “This mother is also a big fan of crossbows which are also truly metal and she deserves our complete and utter respect for this (and for raising three kids)”.

Celine Dion Did Not Make The 200 Greatest Songwriters List And...

Paul Weller “Caught The Dreaded Covid” While On Tour