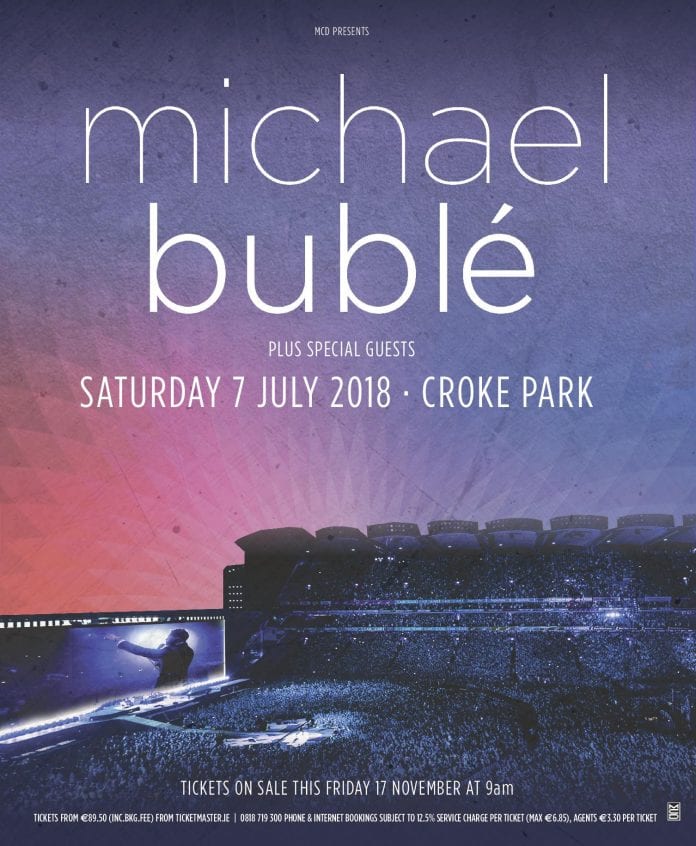 Michael Buble will play a fully seated concert in Croke Park next year on July 7th, 2018. Tickets go on sale this Friday, November 17th at 9am.

Tickets from €89.50 including booking fee go on sale Friday, November 17th at 9am on Ticketmaster.ie and all Ticketmaster outlets nationwide.

The show will be Buble’s only Irish show of 2018. He has previously sold out the Aviva Stadium in 2010, along with four sold out shows in the O2 Dublin in 2013.

Michael has become a household name both here and abroad, thanks to his three Number 1 albums and his hugely popular Christmas album. He released his debut album in 2005 and has since had huge success with hits like ‘Home‘, ‘Everything‘, ‘Haven’t Met You Yet‘ and ‘Lost‘.

Bublé said of the upcoming show: “I can’t wait to come over to see my fans in Dublin and play Croke Park for my largest ever Irish show!  You guys have been patient and I can’t thank you enough for all your support. And for those of you that haven’t seen me live, well… I just haven’t met you yet!“

Bublé’s most recent release was ‘Nobody But Me‘ – his seventh major label studio album released in October 2016. It debuted at number 2 on the Irish music charts and also went platinum in the UK this January.

McCartney Joins Grohl and The Foos To Perform ‘Get Back’ At...