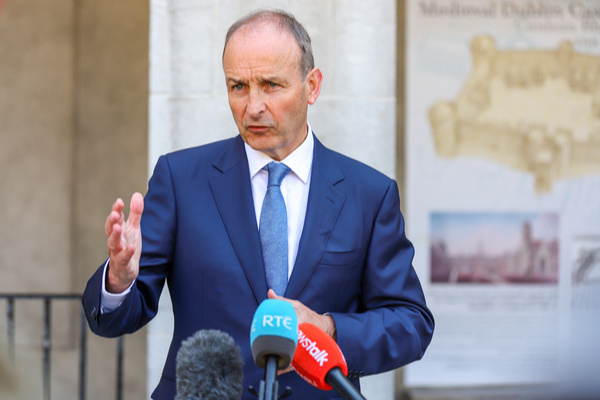 Kerry TD Healy-Rae alleged that Mr Martin had said that he was “in favour of a reduction in the national herd”.

The Taoisech responded by asking Healy-Rae for evidence that he said this. He asked him to “produce the quote”.

“The Taoiseach was quoted, as was the Minister for Agriculture, Food and the Marine”, Healy-Rae retorted. “He can go and find it but it is a fact that he was quoted as saying that”.

The Independant TD also added that this alleged quote was “in the papers”.

“I challenge the Deputy, through the Chair, to produce the quote where I said I am in favour of a reduction of the herd because I never said it”, the Taoiseach added.

“It is not good enough that you would say something that is untrue. He should withdraw it”, he also added. “The Deputy cannot come in here and make everything up every day”.

“That’s unfair to say that I make things up every day”, a furious Healy-Rae fired back.

The Taoiseach issued this three letter response, “you just did”.

This would not be the first time that the Taoiseach and Healy-Rae TD have clashed in the Dáil.

A year ago, Micheál Martin said that he was “reliably informed” that Danny Healy-Rae was telling elderly people outside masses about cataract operations.

“It’s been a game-changer for yourself electorally, in terms of the number of people on buses”, Mr Martin said at the time.

He continued, “I was reliably informed that Deputy Healy-Rae approached people outside mass to say: ‘I can get you on the bus if you want a cataract”.

An angry Healy-Rae branded the Taoiseach a “disgrace” following these “bottom of the barrel” comments.

“God damn it that’s an awful thing to say. If someone belonging to you was going blind, you wouldn’t like it”, he added.

Having initially told Healy-Rae to relax, Micheál Martin subsequently apologised for his comments.

‘The Sun Will Shine On You Again’ Says WWII Veteran After...