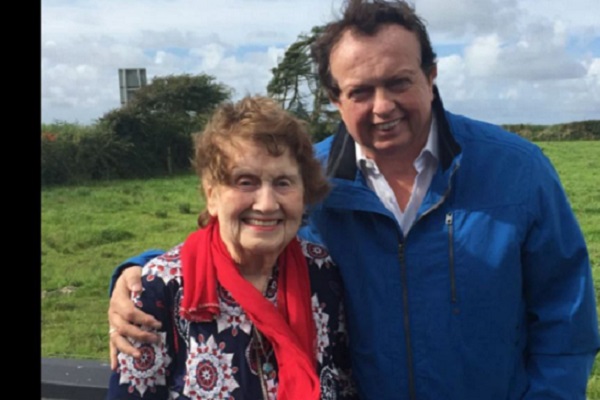 Marty Morrissey is thankful for the public’s “sympathy and support” following the tragic death of his mother Peggy earlier this week.

Peggy sadly died in a single car collision at 12-30am Tuesday. She was confirmed dead at the scene inn Annagh, Miltown Malabay in Clare. Her body was brought back to Limerick University Hospital.

The funeral will take place on Sunday at St Mary’s Church, Mullagh in county Clare.

“Pre-deceased by her beloved husband Martin and her parents Tom and Kathleen. Sadly missed by her loving son Marty, his partner Liz, great friends and neighbours”.

“Requiem Mass will take place at 2pm on Sunday December 12th with burial afterwards in the adjoining cemetery.

“Please adhere to the current HSE guidelines. The family would like to thank you for your sympathy and support at this difficult time”.

“thoughts are with Marty Morrissey”

RTE Director General and colleague of Marty Morrisey, Dee Forbes said that everyone was devastated to hear such tragic news.

“We were shocked and saddened to learn of the sudden passing of our colleague, Marty Morrissey’s beloved mother, Peggy”, she said.

“Our thoughts are with Marty and his family and close friends at this saddest of times”.

RTE Sports journalist Darren Frehill said that Marty “meant the world” to his mother. He called her death “a devastating loss” and “desparately sad”. He also said that Peggy was “extremely popular” in her local community.

Frehill also passed on his deepest condolensces to Marty and his family, on behalf of himself and his colleagues.

Testament to the popularity of Marty Morrissey, that Rising Time host Shay Byrne revealed that “hundreds of texts” have been sent to the show offering their sympathies to the popular RTE star.

Level 5 Lockdown Maintained Until April But Schools & Childcare To...