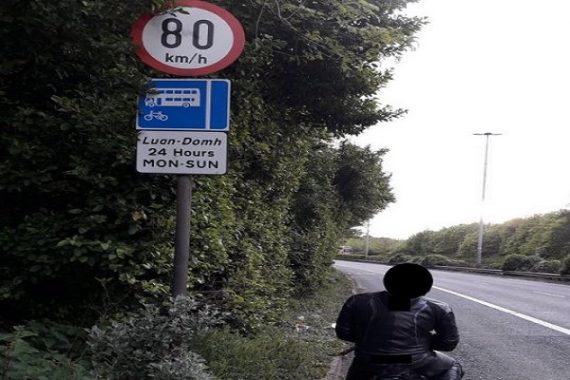 In Co Wicklow, a motorcyclist has been charged after he was caught travelling at 161km/h in an 80km/h zone.

The biker was detected on the N81 at Castleruddery Lower, Baltinglass.

The driver was apprehended in a joint operation by Baltinglass Roads Policing Unit and regular traffic units.

The motorcyclist is now due to appear in Carlow District Court regarding the road traffic offence.

A joint operation between Baltinglass Roads Policing Unit and regular units regarding motorcyclists, a motorcyclist was detected travelling at
161kph in 80kph zone on the N81 at Castleruddery Lower, Baltinglass, Co
Wicklow. Offender charged to Carlow District Court. pic.twitter.com/hJMCr0OA0v

According to BN, a motorcyclist in Dublin was caught undertaking an unmarked squad car in a bus lane while speeding at more than 100km/h.

Dublin -This motorcyclist decided to use a 24hr bus lane to undertake an unmarked Garda vehicle at over 100kph! Most motorcyclists are responsible on the roads but some still fail to heed the warnings on the dangers of speeding. #Easeoffthethrottle #ArriveAlive pic.twitter.com/XR01Y4FLDz

Four people were arrested, two for driving with alcohol in their systems, and another two for cocaine.

Checkpoints are in place across the capital as part of May Bank Holiday road safety and enforcement activities.