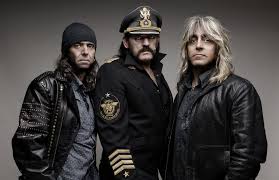 Last week we brought you the good news that Lemmy from Motorhead was back on the road to recovery from his health issues. More so, Motorhead were back performing again and kicked it off at Club Nokia in Los Angeles on April 11th where they were joined on stage by a special guest.
Slash joined the band in their encore songs at the end of the concert and the video of the gig can be seen below, enjoy.