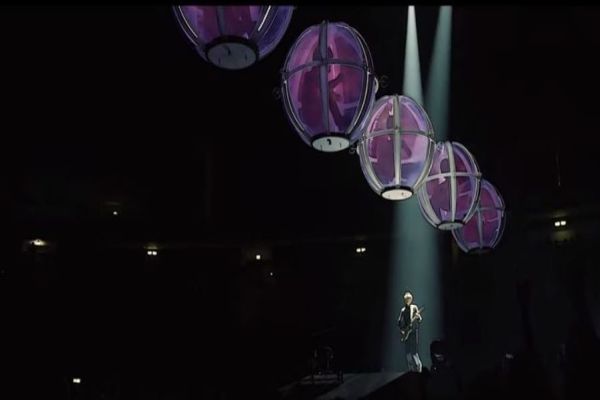 In anticipation of Muse‘s Drones World Tour hitting movie theatres next month, The awesome new trailer for the concert film has been released. It’s available for your eyes and ears below.

Filmed during a stint of tour dates back in 2016, the movie transforms their in the round spectacle to the silver screen. This is one in a series of Muse’s much lauded live concert movies. It features versions of some of the Space rockers’ biggest hits.  Those  include, ‘Supermassive Black Hole’, ‘Plug in Baby’, and ‘Knights of Cydonia’. While the songs are mega in their own right it’s the special effects that serve as a mind blowing compliment to their shows.

Muse frontman Matt Bellamy explained the concept for the tour to the NME, saying, ‘The symbiosis between humanity and technology has always been something I am interested by. Drones just seem to be a very interesting modern metaphor for what that represents… You want to leave people with the idea that they ask the question themselves about the role of technology in our lives and whether it’s a good thing or a bad thing.’

Meanwhile, Muse recently shared a video on social media which seems to suggest that the interstellar outfit are back in the studio working on their forthcoming eighth album. You can read about that here.