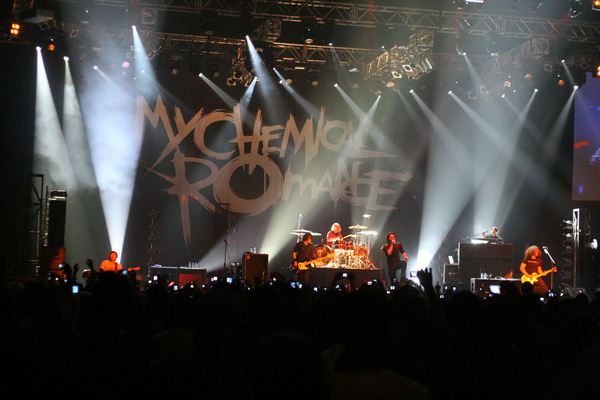 My Chemical Romance will take to the stage at Dublin’s Royal Kilmainham Hospital this month. The band will play two concerts at the venue on May 24 and 25.

These shows will be presented by Aiken Promotions in association with POD Festivals. Tickets are on sale now from Ticketmaster.

A Little About The Special Guests

They have also confirmed that rock band Starcrawler and American pop star Gayle will also join the band on stage as special guests for these shows.

Starcrawler are a quartet based in LA. They are a band who mix pop-punk, along with garage and rock and roll.

They will join My Chemical Romance on stage. They will also perform tracks from their two previous albums, which were released on Rough Trade.

Meanwhile, Gayle is a chart topping singer-songwriter. Her album “ABCDEFU” reached number three at the Billboard Chart 100 last year. This track of the same name has also been described as a “a study of the human experience volume”.

As for My Chemical Romance. Well they certainly do not require a major introduction. Making their debut in 2002, the band have had a hugely successful career in music.

Having released their debut album album ‘I Brought You My Bullets, You Brought Me Your Love’, the band have seen several albums reach Platinum, as well as topping Billboard’s Alternative and Top Rock Album’s Charts.

Back in March, My Chemical Romance cancelled their upcoming shows in Russia and Ukraine, due to the ongoing conflict between the two countries.

They were scheduled to hit the stages at St Petersburg on June 16, Moscow on June 17, and Kyiv on June 19. These shows were part of the band’s comeback tour.

At least we get to see them slightly closer to home!!