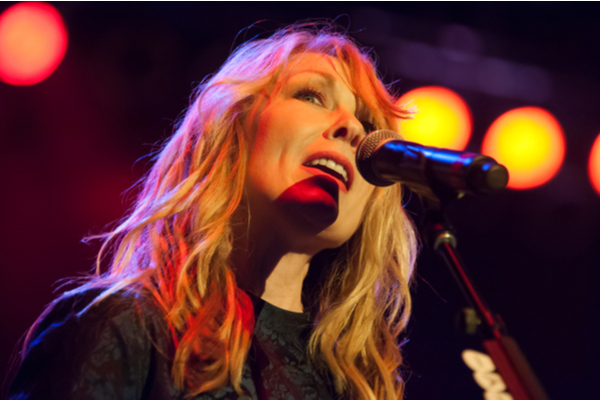 Heart guitarist and backup vocalist, Nancy Wilson has recalled a conversation with Robert Plant about Led Zeppelin’s Stairway To Heaven. Wilson, along with her sister Ann, performed the classic track at the Kennedy Centre in 2012, in honour of the Rock And Roll legends.

Robert Plant was visibly moved by Heart’s reimagination of the 1971 rock classic. The sisters were joined by John Bonham’s son, Jason, and the drummer for Led Zeppelin’s 2007 reunion show. Their version of the track gradually grew to include a string section, backup singers, and the Joyce Garrett Youth Choir.

Jimmy Page, Robert Plant and John Paul Jones sat watching from the balcony, failing to hide their emotion, particularly Plant, who had tears welling up in his eyes. Speaking to Zepp’s lead singer after the show, Nancy found they helped heal the negative feelings Plant had towards the hit.

“It went off really great,” Nancy explained in a recent episode of the Eddie Trunk Podcast. “Afterward, the Zeppelin guys each came back individually… [John Paul] Jones was like, ‘Wow, you did a great job.’ And Robert Plant goes, ‘Whoah, I learned to just hate that song because everybody murders it – but you did it justice. Way to go!’ And Jimmy Page goes… ‘You played that great; just lovely.’”

Nancy revealed her most emotional moment was made even more so with the introduction of Bonham’s son, Jason as part of the extended band on stage. The guitarist explained Jason “was the little kid that grew up with them, like his uncles”, and used to be “scampering around” rehearsal spaces.

For the one and only rehearsal which took place before the performance, Nancy recalls not playing particularly well. The guitarist explains “it was cold as heck in Washington D.C.”, and her hands were “freezing when we finally got into the practice room”.

“All the choirs and all the players were there…”, Nancy explains. “So, it’s like, ‘Okay, go, let’s just play ‘Stairway to Heaven’. You start.’ … I’m trying to play this beginning, and I’m just barely getting it together, because it was just a cold, draughty old place.

“The guys in the house band were like, ‘Oh, well, we could just shadow you. You just kind of play along, kind of behind…’ It’s like, ‘No, no, seriously, I got this – don’t worry about me. … I’ve got this. I’ve been playing this all my life’”. The next day, before the show, Nancy made certain her hands were warm enough. “I walked out there, took a really, really deep breath, just looked them in the eye, had a very big exhale and started.”

Heart formed in 1973, following several name changes since 1967, and had huge success in the seventies and Eighties. Nancy’s sister, Ann embarked on a solo tour in 2015, billed as The Ann Wilson Thing, releasing an accompanying EP. In February 2019, Heart announced that their on-off hiatus had ended and embarked on their Love Alive tour. In March 2019, both sisters reunited on stage for the first time since the band went on hiatus in 2017.