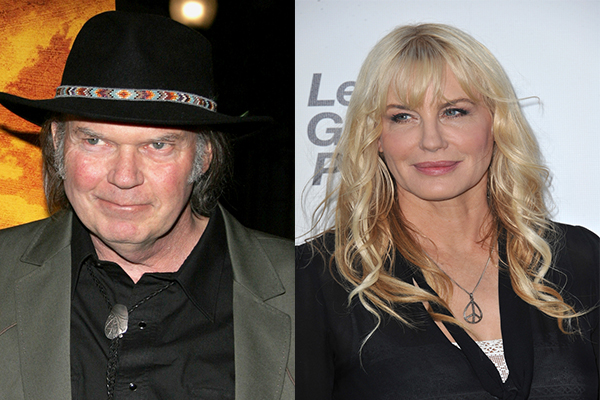 According to the Mirror, the couple reportedly got married in a humble ceremony with close friends on Saturday in Atascadero, California. The happy occasion followed an earlier gathering near the Sun Juan islands aboard Neil Young’s private yacht.

After the simple message, “Congrats N & D,” was announced on Young’s blog, it prompted one fan to ask if it was the real deal, to which the site responded, “Several attendees at (the) reception yesterday in central CA area have confirmed.” The special day was described as a “Shindig.”

Guitarist Mark Miller confirmed the news on Facebook, stating, “Congratulations to Daryl Hannah and Neil Young on their wedding today. I only knew about it because one of my friends attended the ceremony in Atascadero and announced it on his page.”

Then to allay any further doubt, Hannah herself posted the following on Instagram, the caption with the post read, “Someone’s watching over us…Love & only Love.”

Young and Hannah have been partners since 2014, around the time that Young filed for divorce from Pegi Young, his wife of 36 years. Hannah directed Young in the Netflix film, Paradox, earlier this year.

Meanwhile in May, Young announced that he is going to withdraw from social media to concentrate his efforts on his website Neil Young Archives.

Although sections of the site will stay free, Young is introducing a membership charge of €1.60 per month or €16.70 per year, which will allow members to access archive and new material, concert tickets and special web events before anyone else.

In a statement on Facebook he said: “I appreciate you and want you to always have the first choice. I want to share with you that I have made a place for my music to live. It will also be the place where I live on the web. I won’t be here. I wanted a place where I could hear my music from the very beginning, from the high school bands I was in, to my latest recordings-audio and visual. I wanted to be able to hear it all […] A giant time machine cabinet.”