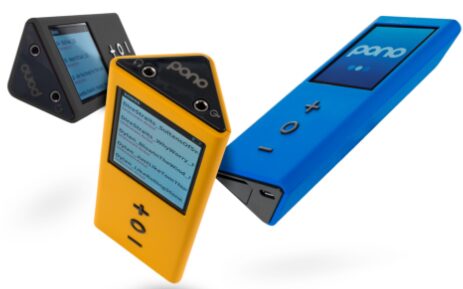 For those of you that aren’t up to date on this story, Neil Young is launching a new music player called the hi-def PonoMusic player.

To give a brief description of what exactly the Pono is, Pono is a high-resolution audio ecosystem consisting of a download service supplying digital audio files transferred from the original audio masters at 192kHz/24 bit, and a dedicated player with the ability to play back those files at that resolution. The device’s USP is that the quality of music from this device will be far better than any other on the market.

The project has surpassed its Kickstarter goal of $800,000 and reached over $1.4 million in funding so far. Important to note the campaign was only rolled out on the 11th of March and in that time reaching that $1.4 million marker is quite an achievement and more importantly shows the desire for the product.

Backers of the Pono are expected to receive discounts on orders of the Pono as well as a assortment of extra goodies.
When the music player goes on sale the expected cost price is believed to be in the £400 dollar mark, making it a quite expensive bit of kit. Which leads us onto the next point. Why exactly is this piece of hardware so desireable? The choice of music players on the market today isn’t lacking by any stretch of the imagination. So why is there a need for this?

Is it due to the man that is behind it? If Neil Young is saying that this piece of kit is better than anything out there already, there would be a lot of people that would be more than willing to take his word for it, and coming from one of the best musicians of his, or any generation he certainly has some influence in marketing the product.

But lets take it from another point of view, one that’s not from the point of view of a Neil Young fan, and have a look at what people in the know are saying about it based on the technology it is proposing to furnish.

Other issues that have been raised are of convenience.

The user will have to purchase a dedicated player instead of using one of the multitude he or she already owns around the house and the songs will take longer to download due to the extended resolution of the songs, something that people don’t like in a period where we want things instantaneously, especially when it comes to new media elements.

These are just a couple of issues that may come to the fore in time regarding this device and are probably important issues at that, especially when we have invested so much time in other devices that work in relative terms, perfectly well.

So maybe this device is more for the die hard music fan that wants the best audio possible for their listening pleasure. But what is sure so far, and can be seen from the Kickstarter revenue, is that there is an appetite out there for this device, weather that appetite will transform into profits remains to be seen.

So far it is an interesting venture, one that may, or may not be a rival to some of the more mainstream musical devices on the market, a market which sees huge names like Apple dominate.

As usual we will keep you updated on the story as it comes.