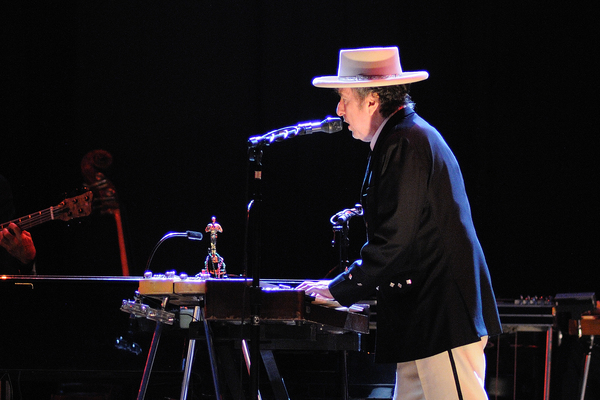 Bob Dylan has released a new video for his 1983 song License to Kill, which originally appeared on the album Infidels.

The video features a newly remixed version of the original and contains previously unseen footage from the Infidels sessions.

The new video for License to Kill features previously unseen footage of all the members of the Infidels sessions band, which was shot at the Power Station in New York City on April 30th, 1983.

The video sees the band miming to the original version of License to Kill that appeared on Infidels, but the production has been remixed to make it sound less dated. This mostly involved changing the sound of Dunbar’s drums.

“We just went with the natural way the drums were mic’d,” a source close to Dylan revealed. “But Sly kept his snare drum very tight. That was a reggae thing, and that’s a sound you’re never going to get totally away from.”

License to Kill features the lyric “Man has invented his doom/First step was touching the moon,” which appeared to be Dylan’s critique of the space race. In 1984 Dylan was asked about the lyric in an interview with Rolling Stone’s Kurt Loder.

“What’s the purpose of going to the moon?” Dylan counter-questioned. “To me, it doesn’t make any sense. Now they’re gonna put a space station up there, and it’s gonna cost, what — $600 billion, $700 billion? And who’s gonna benefit from it? Drug companies who are gonna be able to make better drugs. Does that make sense? Is that supposed to be something that a person is supposed to get excited about? Is that progress? I don’t think they’re gonna get better drugs. I think they’re gonna get more expensive drugs.”

The new License to Kill video was released to promote the latest in Dylan’s seemingly never-ending bootleg series. Springtime in New York: The Bootleg Series Vol. 16 (1980-1985) is a new five-disc collection of outtakes from the sessions for 1981’s Shot of Love, 1983’s Infidels, and 1985’s Empire Burlesque.

A video for Don’t Fall Apart on Me Tonight (Version 2) was recently released and contains footage shot around the same time as that seen in the License to Kill video.

Dylan embarks on a short tour of US theatres on November 2nd in Milwaukee, Wisconsin. The tour wraps up a month later in New York. However it’s being pitched as the first leg of a worldwide tour set to run until 2024.