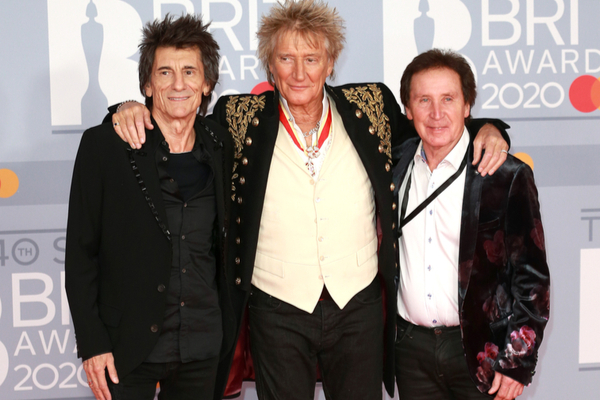 Drummer Kenney Jones has said that the reunited Faces are making strong progress with their new album. The band have announced plans for new material last Summer.

Alongside Rod Stewart and Ronnie Wood, Jones has also revealed that the band have been working on new material for a new album.

Back in 2020, the Faces had also played at the Brit Awards as special guests. Check that out below.

On this new album, Kenney Jones remained coy, only revealing that the trio had been working with “some well known people”.

“I don’t want to give away too much at this point, but there will be some special guests on there with us”, Jones said.

“We’ve already done a few overdub sessions with some well known people, which will remain a trade secret for the moment. All I can say is that it’ll be out when it’s finished. There are so many other factors involved, not just the touring backlog but things like delays due too vinyl shortage”.

Along with this, lead singer Rod Stewart said that this “very very worthy” Faces album is in the works. Adding that “it is gonna be good”.

“It’s very, very worthy”, he told ABC Audio. “When you dig out tracks that [are], like, 40 years old or whatever, you suddenly realize, wow, we were good and we did have a different sound, chaotic as it may have been”.

“We’re working on it”, he added on the new Faces album.

“mixture of old and new”

In a separate interview, Kenney Jones also revealed that this new album will feature a “mixture of old and new” material.

“What we’ve decided to do is work on some of the original stuff that we didn’t use”, he said. “Ronnie and I, in particular, have been working on lots of the old stuff together and we’ve rerecorded a couple of those songs with more of a modern feel”.

After the Faces split up in 1975, Ronnie Wood joined the Rolling Stones, who have recently announced they will tour again in 2022.

Rod Stewart also released a new solo record last November called The Tears Of Hercules. Stewart was also scheduled to hit Austrailia for a live tour, but that has been delayed due to Covid-19 issues.