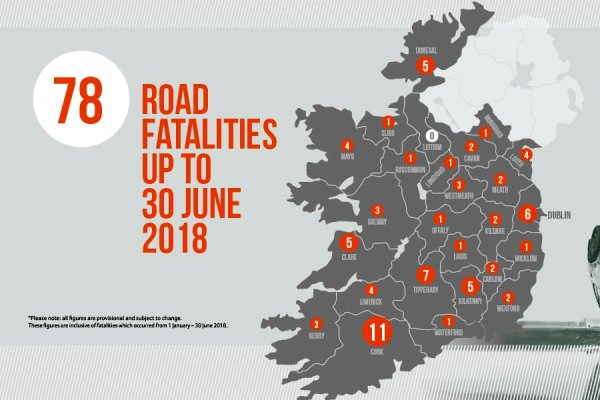 The Road Safety Authority and An Garda Síochána have today published a provisional review of road fatalities for the first half of 2018.

From January to 30 June 2018, 78 people died on Irish roads in 73 collisions.  This represents 3% more collisions and 3% more deaths compared to provisional Garda data for the same period in 2017.

The RSA has warned that, if the current trend continues, up to 78 more people could die before the end of 2018. The review shows that:

The Review of Fatal Collisions from 1 January to 30 June 2018 found that:

As of Monday 9 July, 83 people have been killed on Ireland’s roads, three more than the same period last year.

There have been 78 fatalities on Irish roads as of 30 June 2018. This sees a 3% increase for the same period in 2017. We will be reviewing the rest of the mid year road safety statistics in just five minutes #RoadSafetyReview18 pic.twitter.com/dwUw1ADUCU

Weekends have been especially dangerous in 2018, with 50% of fatalities on Irish roads occurring between Friday and Sunday #RoadSafetyReview18 pic.twitter.com/wahicrpYa5

The image tells us that the majority of fatalities have been male on roads with a speed limit of 80km/h or more #RoadSafetyReview18 pic.twitter.com/rtSvGtHxRC

The breakdown of fatalities tells us a story of how safe our roads have been in 2018 to date. The summarising images simply demonstrates that there have been far too many #RoadSafetyReview18 pic.twitter.com/R9tnA6GSKf