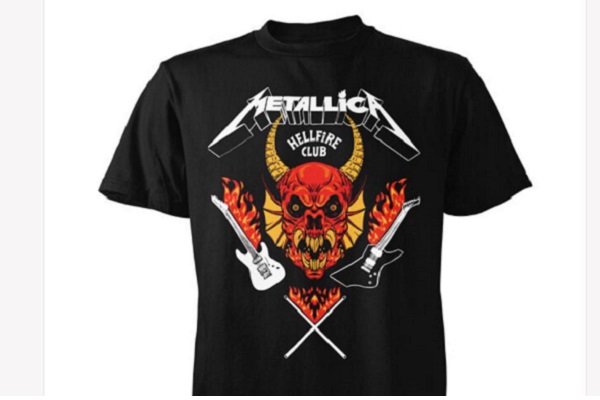 The recent alliance formed between Metallica and Stranger Things continues, as the band and Netflix hit have combined to release a set of branded Hellfire Club T Shirts.

This comes after Metallica’s track ‘Master Of Puppets’ has also enjoyed a recent resurgence in popularity following its inclusion in the Netflix hit.

The Hellfire Club logo has also appeared on T Shirts in real life and the show. The logo is a screaming Devil’s Head, framed by a mace and a flaming sword.

“Eddie, this one’s for you”

Metallica confirmed the news regarding this recent collaboration via social media.

“Eddie, this one’s for you”, they wrote. “We’re having the most metal meeting ever of The Hellfire Club so we’re scouting out ‘lost sheep’ and outsiders to join. Do you think you have what it takes? Then suit up”.

We’re having the most metal meeting ever of The Hellfire Club so we’re scouting out “lost sheep” and outsiders to join. Do you think you have what it takes? Then suit up!

These items are also available via the Metallica Merch Store, the webstore, and Netflix’s online store.

Along with playing Metallica track ‘Master Of Puppets’, the pair also played some of Metallica’s greatest hits.

On top of the recent resurgence of ‘Master of Puppets’, Metallica have also landed the most ticket sales from any metal band in the last 40 years, according to reports from Pollstar.

In that time, the band have sold over 19 million tickets, for stand alone headline shows, according to this report.

Only five music artists have sold more tickets than the band across all genres, including U2, the Dave Mathews Band, The Rolling Stones, Bruce Springsteen, the E Street Band and Elton John. More on this here.