Home Classic Albums You Can Listen To Oasis- ‘Definitely Maybe’ In Full Tonight From Midnight... 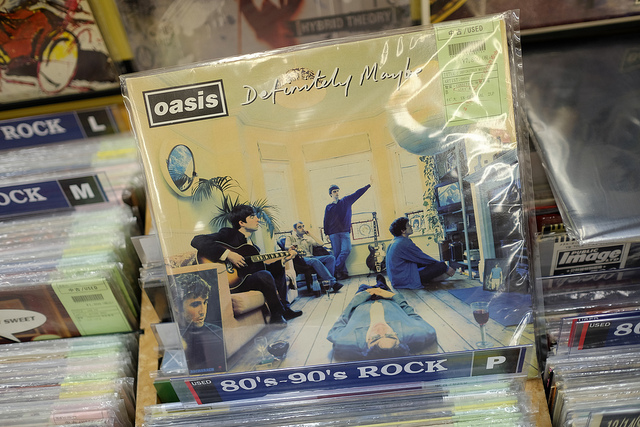 Definitely Maybe is the debut album from Oasis and it was released on the 29th of August 1994. It would go on to become the fastest selling debut album of all time in the UK.

Definitely Maybe begins with a statement of aspiration, as Liam Gallagher sneers that “tonight, I’m a rock & roll star” — the words of a bedsit dreamer hoping he’d break out of those four walls and find something greater. Maybe all he could muster is a fleeting moment of stardom as he sings in front of a fleet of amps pushing out power chords, or perhaps he’d really become a rock & roll star; all that matters is he makes the leap.

This dream echoes throughout Oasis’ debut, a record which takes the dreams of its listeners every bit as seriously as those of its creators. Both the artist and audience desire something greater than their surroundings, and that yearning gives Definitely Maybe a restlessness that resonates.

Certainly, Oasis aren’t looking to redefine rock & roll here; they’d rather inhabit it. They scour through the remnants of the past three decades to come up with a quintessentially British rock & roll record, one that swaggers with the defiance of the Rolling Stones, roars with the sneer of the Sex Pistols, thieves from the past like the Happy Mondays, and ties it all together with a melodicism as natural as Paul McCartney.

Even if Definitely Maybe never quite sounds like the Beatles. All the Fab Four comparisons trumpeted by the brothers Gallagher were a feint, a way to get their group considered as part of the major leagues. Soon enough, these affirmations became a self-fulfilling prophecy — act the way you’d like to be and soon you’ll be the way you act, as it were — but that bravado hardly diminishes the accomplishment of Definitely Maybe.

It is a furious, inspiring record, a rallying cry for the downtrodden to rise above and seize their day but, most of all, it’s a blast of potent, incendiary rock & roll. Soon after its release, Noel Gallagher would be hailed as the finest songwriter of his generation, an odd designation for a guy drawn to moon/June rhymes, but his brilliance lies in his bold strokes.

He never shied away from the obvious, and his confidence in his reappropriation of cliches lends these bromides a new power, as do his strong, sinewy melodies — so powerful, it doesn’t matter if they were snatched from elsewhere (as they were on ‘Shakermaker’ or the B-side ‘Fade Away’). The other secret is of course Noel’s brother, Liam, the greatest rock & roll vocalist of his generation, a force of nature who never seems to consider either the past or the present but rather exists in an ever-present now.

He sometimes sighs but usually sneers, shaking off any doubt and acting like the rock & roll star Noel so wanted to be. This tension would soon rip the group apart but here on Oasis’ debut, this chemistry is an addictive energy, so Definitely Maybe winds up a rare thing: it has the foundation of a classic album wrapped in the energy of a band who can’t conceive a future beyond the sunset.