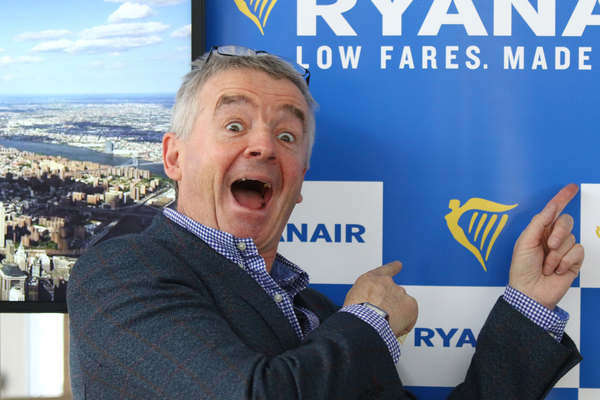 The Ryanair Michael O’Leary boss claims restrictions on holidays to Spain, Portugal and Greece will be dropped by the summer

Ryanair CEO Michael O’Leary has predicted people in the UK could book their holiday for the summer, during an appearance on Good Morning Britain. O’Leary believes all restrictions for “short-haul flights” between Spain, Portugal and Greece will be removed, responding to claims Dr Hilary Jones made last week.

Dr Hilary said people going on holiday for fun were “foolhardy”, but O’Leary believes all restrictions for “short-haul flights” between these countries will be removed in June, July, and August. The aviation tycoon pointed to the uptake in vaccinations and further, forthcoming vaccine production, as reasons to hope for a sunny holiday. O’Leary believes the vast vaccination production helps Europe’s vaccination program catch up with the UK’s, allowing travel between favourite destinations.

“It would certainly be foolhardy to book holidays for April and May,” said O’Leary, “but I think you’re going to see the removal of all restrictions on short-haul flights [between these countries], certainly with the school holidays coming around June, July and August”.

Restrictions are currently in place for all foreign travel until May 17th, aside from essential purposes, with fines of up to £5000 being imposed. Travelling for work, volunteering, studying, legal obligations, medical reasons, attending a funeral, or going to a wedding or civil partnership of a close family member are currently permitted. Although O’Leary is confident of a forthcoming lift on current restrictions, members of the government’s Scientific Pandemic Influenza Group on Modelling consider holidaying “extremely unlikely”.

In contrast to O’Leary’s comments, Dr. Mike Tildesley said the UK faces a “real risk” if people travel abroad. During an interview with BBC Radio 4, he warned “of the potential for bringing more of these new variants back into the country”. Tildesley said it will be really dangerous if they jeopardise the UK’s vaccination campaign “by having these variants, where the vaccines don’t work as effectively, spreading more rapidly”.

In opposition to O’Leary, Transport Secretary Grant Shapps said it was “too early to tell” when foreign travel would be allowed, while Health Secretary Matt Hancock has claimed that the door is “not shut” for Brits holidaying abroad this summer.

O’Leary has previously criticised restrictions, with the Ryanair CEO branding the Government’s plans to quarantine travellers coming into Ireland for 14 days as ”ineffective”. He expressed bafflement at the plans “despite the fact that Ireland has performed better than most of the rest of Europe in tacking and reversing the impact of COVID-19. Ireland is introducing far more restrictive travel restrictions at a time when the rest of Europe is opening up.”