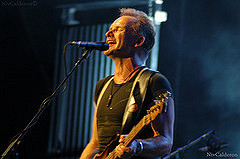 Last night saw the 89th annual academy awards take place at the Dolby Theatre in Hollywood , California. There was a lot of anticipation around this year’s Oscars, following last years ‘Oscars So White’ controversy and this year’s politically charged Golden Globes.

Host Jimmy Kimmel did drop a few Trump jokes; live tweeting him “Hey @realDonalTrump u up?”

Performances of the night saw Justin Timberlake open the show and John Legend perform songs from La La Land . But it was Sting’s hauntingly beautiful performance of the Oscar nominated song, ‘The Empty Chair’ that stole the show.

In one of the evening’s most sombre moments, Sting performed an emotional rendition of his Oscar-nominated song “The Empty Chair” at the 2017 Oscars.

The song, with music by J. Ralph, was featured on the soundtrack of Jim: The James Foley Story, a documentary which chronicles the story of American journalist James Foley who was captured and killed in Syria.

Dressed in black, Sting sang lyrics which recount the absence from a deceased loved one from a family gathering. The performance ended with a quote from the subject of the film “If I don’t have the moral courage to  challenge authority…we don’t have journalism.”

Sting has been nominated three previous times for Best Original Song. His first nomination was for “My Funny Friend and Me” from The Emperor’s New Groove and most recent was “You Will Be My Ain True Love” from Cold Mountain. Last year, J. Ralph was up in the category for the track “Manta Ray” alongside Anohni from the documentary Racing Extinction.

Another stand out moment of the night was the absence of Director Asghar Farhadi who won the Academy Award for foreign-language film Sunday night for “The Salesman”. The director boycotted the ceremony in protest of the travel ban implemented . Anousheh Ansari the first Iranian in space, accepted the award for Farhadi and read a short statement from the director. “My absence is out of respect for the people of my country and those of six other nations whom have been disrespected by the inhumane law that bans entry of immigrants to the U.S.,” Farhadi’s statement said.

But the moment that the 89th awards will now be forever remembered for is the best picture gaffe!

Hollywood legends, Warren Beatty and Faye Dunaway took to the stage to announce the award for Best Picture. La La Land was announced the winner and the whole cast trampled on stage. Half way through the acceptance speeches, producer Jordan Horowitz, proclaimed, “There’s a mistake.”

Horowitz snatched the envelope from Warren Beatty’s hand and sure enough the card read Moonlight.

Accountants Price Waterhouse Cooper, who oversee the ballots, said the presenters had mistakenly been given the wrong category envelope.

“We are currently investigating how this could have happened, and deeply regret that this occurred,”

PwC said in a statement, while apologizing to “Moonlight” and “La La Land”, Beatty and Dunaway and Oscar viewers.

Irish audiences can watch the ceremony tonight on RTE 2 at 9.30pm.