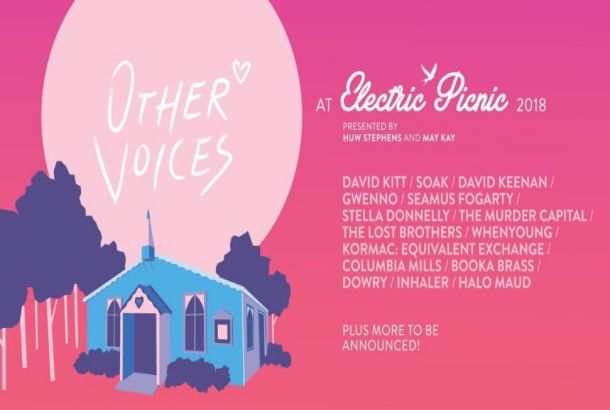 After such a great reception at last year’s Electric Picnic, Other Voices have added more acts to the stage. Among the acts heading their way to perform for the crowds at Stradbally include David Kitt, Soak, Gwenno, Halo Maud and a heap more. We’ve compiled a comprehensive list below of the bands playing Other Voices at Electric Picnic 2018.

BBC 1 music champion Huw Stephens and May Kay will both host the excellent lineup. A selection of the acts are set to feature on TV shows that are due for broadcast at a later date. This year’s lineup is a varied mix of both Irish and international artists. The majority of which hail from the folk, rock and singer-songwriter genre.

Aahhh one of my favourite weekends of the year. Look at this beautiful line up 😍 @OtherVoicesLive hits @EPfestival again this year ⭐️ pic.twitter.com/bEDw9fJebb

Of the acts playing, Nova Recommends:

Fogarty spent his formative years growing up in Co. Mayo. The west would serve as an influence as he spent his youth writing songs about mountains and the loss of t-shirts, women who resemble dinosaurs and various other unfortunate incidents. In 2017, he released his sophomore record ‘The Curious Hand’ which received a 5-star review in The Guardian,. As well as this the singer songwiter enjoyed excellent reviews in Mojo, Q, Uncut, Irish Times and Hot Press among others. Seamus will be bringing his individual sound home to Other Voices Ballina in September but first we get the chance to catch him at Electric Picnic!

David Kitt, renowned Irish musician/producer that crosses multiple genres. He has recorded seven studio albums to date, from his quietly magnetic 2001 debut Small Moments, through the expansive ambient textures and looping pop mantras of The Big Romance, through Square One, covers album The Black & Red Notebook, Not Fade Away & The Nightsaver (2009). He makes his return to this year’s Other Voices Stage on the back of his latest record Yous.

Welsh artist GWENNO will join Other Voices for her debut performance. at Stradbally. Her first album ‘Y Dydd Olaf (The Final Day)’, was a concept album based on Welsh writer Owain Owain’s 1976 sci-fi novel of the same name. Pitchfork described it as “one of the best British debuts of 2015”. Her most recent release ‘Le Kov (The Place of Memory’) is a sublime record, swirling with ancient myths and urgent modern thems, recorded in Cornish.

The rest of the line up  is shaping up nicely: