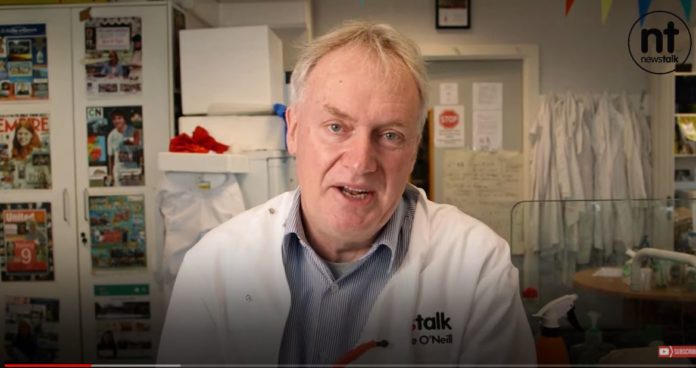 Immunologist, Dr Luke O’Neill has insisted that outdoor gatherings are safe. But he said people must meet in smaller and dense crowds to avoid the spread of Covid-19.

Dr O’Neill was speaking about the recent controversy surrounding the large gatherings that took place in Dublin over the weekend, and the unhappy tweet posted by the Chief Medical Officer Dr Tony Holohan.

Following the CMO’s tweet, Tánaiste Leo Varadkar said that there is a danger of an “overreaction” when footage of large crowds goes viral. He said this publicity can be a disservice to people who have been adhering to the guidelines.

Following these gatherings, Dublin City Council released a statement. They said that a significant amount of waste was left behind.

“Gatherings of this size and nature are contrary to current public health regulations”, they said.

They also added that they will be “taking some actions that will improve the situation for the coming weekend”.

Safe but not perfect

Dr Luke O’Neill has now said that outdoor gatherings are safer than socialising indoors, but it is still not perfect.

“That problem in Dublin, if they spread out more it would have been fine. The density of the people is the issue there”, he said.

“You can understand people wanting to get out”, he added. “In many ways, we saw this coming… and next weekend will be the same, watch, with the Bank Holiday. If people just spread out a bit, and aren’t in such dense crowds, it’s safe outdoors”.

“I wouldn’t blame the young people – they want to get out and get back to things. But it’s a shame it wasn’t anticipated better”.

Dr O’Neill’s comments do bring cause for optimism as pubs and restaurants around the country prepare to reopen for outdoor dining next week.

However, Dr O’Neill did urge caution against the Indian variant, which he said is “much more transmissible” in larger crowds.

“The trouble is if the Indian variant was in that crowd, it’s much more transmissible. Maybe it will emerge with a new variant there is outdoor spread”, Dr O’Neill said.

“The analogy is if you can smell someone’s perfume or smell someone smoking… then you could be getting exposed to the virus. But time is the other key variable… if they were in that massive crowd for an hour or two, then that would be a worry”.

Dr O’Neill also added, “There are so many variables, really. We have to wait and see. I’m hoping there won’t be any evidence now that was a superspreading event”.

Back in March, the professor revealed the level of abuse aimed in his direction from people in opposition to the vaccine.

“I was walking down Grafton Street on my lunch break and a guy pulled me back by the collar. I got a fright, thinking what is this about. He started shouting and roaring all kinds of abuse at me. Anti-vaccine stuff”, Dr O’Neill told Claire Byrne. More on that report here.