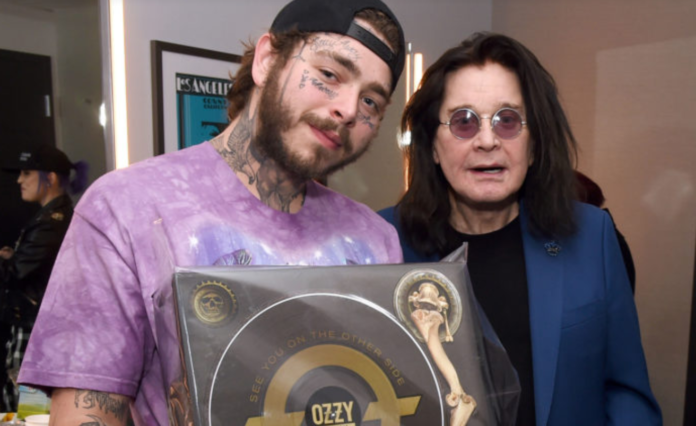 Ozzy Osbourne has shared the new video of his collaboration with Post Malone. It is called “It’s A Raid”. You can watch the clip here.

The track’s video was directed by Tomos Lenert. It also features cartoon versions of Malone and of course Osbourne. At the start of the clip, Osbourne and Post Malone are in the infamous Bel Air CA house.

They are both riding through the streets of LA chased by police. On this chase, they pass famous LA landmarks.

Billboard described the track is “is a blitz of screaming metal that finds Osbourne in classic spooky grandpa mode, wailing about voices breathing through the phone, never feeling alone and the horrifying revelation that God is actually Satan, and he’s waiting right here for you”.

Whie Rollingstone called it a “thrashy new track”. They also added, “Osbourne takes the lead with Malone serving as Osbourne’s backup singer and hype man for the rest of the track”.

Spin also described the track as a “banger”.

The track had originally featured on Ozzy Osbourne’s album, “Ordinary Man” in 2020. That album also included the two artists collaboration with Travis Scott, “What You Want”.

Ozzy Osborune did admit in a statement that before working with him, he did not know who Post Malone even was.

He said, “A couple of years ago I didn’t even know who Post Malone was”. Since then we’ve worked together on two studio tracks and have performed together twice”.

Osbourne added, “Understandably COVID-19 made it difficult to get together to shoot a music video for ‘It’s A Raid’ so we opted for this wildly imagined animated video for the final single from the ‘Ordinary Man’ album”.

Osbourne also confirmed that he is working on a follow up the “Ordinary Man” with Malone’s collaborator, Andrew Wat. Ozzy had this to say, “I can’t wait to for everyone to hear my new music”.

On working with Osbourne, Watt said, “We talk every single day and we’re working on a second record. His whole family is the most giving family”.

He also added, “Ozzy was very sick when we started the first album ‘Ordinary Man’ recovering from his neck surgery, and this album gave him another lease on life”.