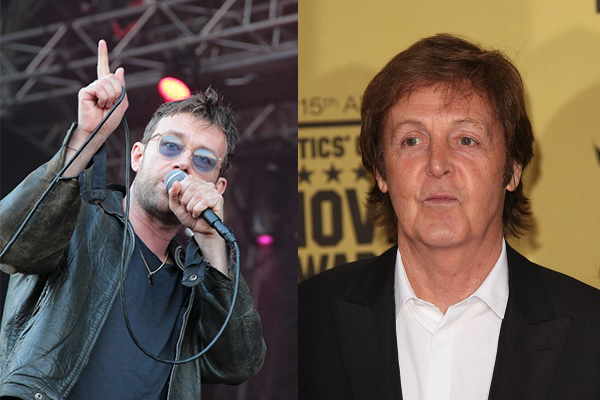 Paul McCartney has just released his latest album ‘Egypt Station’ and in a new interview with GQ Macca has discussed Damon Albarn’s warning to McCartney over Kanye West.

Kanye West enlisted McCartney to help him write a few songs like “Only One,” “FourFiveSeconds,” and “All Day.” Damon Albarn said that he warned McCartney not to work with West. Albarn maintains that he texted McCartney and told him “beware,” and he characterized the relationship between West and McCartney as an “abusive” one.

In the GQ interview, McCartney responds to the question of whether he received that text from Albarn, “He might have. I don’t remember. But I wouldn’t listen to him. I don’t listen to people… I love the respect someone like Damon is attributing to me, but I’m not that fussed. If I want to go somewhere else from where I normally go or where I’m expected to go, I’ll go. And if I enjoy it, that’s enough for me. The great thing is, all sorts of hysterical things come out of it. I mean, there’s a lot of people think Kanye discovered me. And that’s not a joke.”

McCartney also said that West offered to produce Egypt Station for him, “I thought, no, I kind of knew what direction I wanted to go in. And I knew that would be very different from where Kanye would go with it… I said, “That’s great, wow.” I’m just amazed that he said it. And then we never talked about it again. It was just a thought that was thrown away. I certainly thought about it and got very excited and thought, “That’s something, there’s no denying that… But is it something I want to do?” There’s the thing. And I thought, “Maybe not.”

McCartney also discussed using Auto-Tune on a song that thankfully isn’t on his new album, and said that John Lennon would’ve loved Auto-Tune! “Because I know people are going to go, “Oh no! Paul McCartney’s on bloody Auto-Tune! What have things come to?”… At the back of my mind, I’ve got Elvis Costello saying, “Fucking hell, Paul!”… You know what? If we’d had this in the Beatles, we’d have been — John, particularly — would be so all over it. All his freaking records would be.”

According to the article McCartney then breaks into song to give his impression of an Auto-Tuned John Lennon. Imagine that!