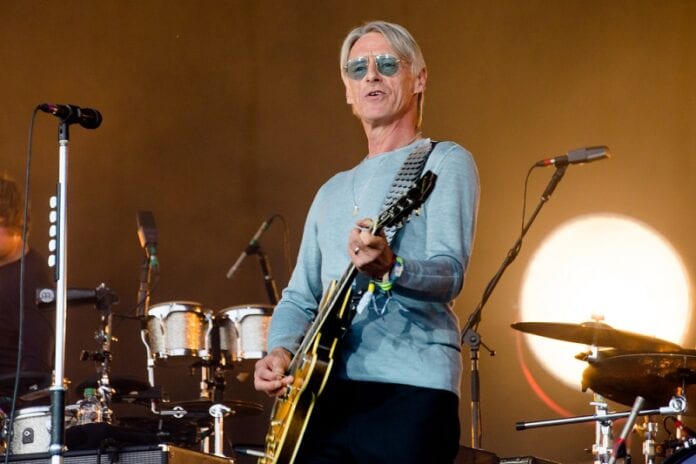 Paul Weller has revealed that he still gets nervous before live shows. “The hour before (a gig), I’m in bits”, the singer admitted.

The former frontman for The Jam recently released his 16th studio album Fat Pop (Volume One), following up On Sunset from 2020.

Weller did also admit that he was unsure if another album is on the horizon.

“The music business has changed so much in the last few years, I don’t really recognise it anymore”, he said.

“Thankfully, there’s still great music being made and I’m sure that will always stay that way”, he added. “But generally I don’t think people invest in music like we did before streaming/downloads etc”. More on that here.

Speaking to GQ magazine, Weller admitted that even now after almost 50 years in the music business, he is “in bits” in the hours leading up to a gig.

“It’s almost a weird thing because, just prior to going on stage, especially in the hour before, I’m in bits”, the Modfather said.

Weller added that the nerves tend to evaporate once he sings his opening song at a live show.

“I’m so nervous and so don’t want to be there and want to go home, and then within minutes of actually being on stage, as soon as that first tune strikes up, I automatically feel as though this is completely where I’m supposed to be”.

“It feels like the most natural, most comfortable, Zen-like place you could possibly be, it’s so weird”, he continued.

Paul Weller admitted it took “at least two years” to adapt to singing live on stage without taking a drink.

“When I finally stopped drinking it took me at least two years to get used to that feeling of going on stage totally sober and straight”, he said. “And now I love it”.

“But it took a good two years to get comfortable, as it was really odd at first”, he continued.  “I’d be on stage and I’d notice so much, like there’s a guy in the front row who’s wearing a green shirt or something, and now I don’t feel that at all”.

Instead of a drink, Weller said that he tends to turn to having a cup of tea post gig for his after show ritual.

“I have a cup of tea these days. In the past, I would have got off my nut, but I don’t anymore”.

“But if you have a gig like that and that becomes your benchmark, you’re always looking to get back to the moment, which is not always possible”, he explained. “But that becomes the thing you’re always searching for, to find that connection. We’re always striving for the spectacular”.

A close friend of Weller, Noel Gallagher revealed that the Modfather had been working on new material over lockdown. More on that here.

Weller also recently took to Twitter to wish his friend a happy birthday.

Weller also tweeted old footage of his former band The Jam singing one of their hits “A Town Called Malice” live.