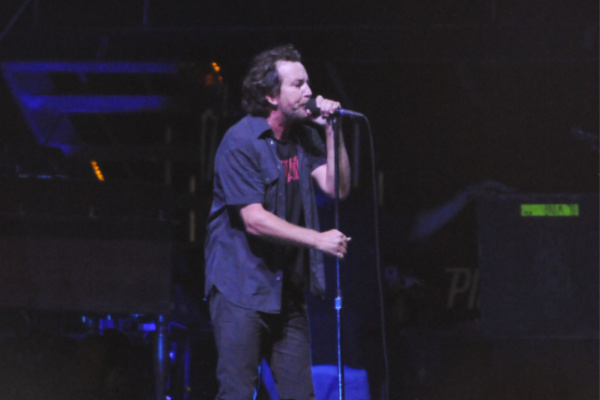 Last week, the band cancelled a show in Vienna after Vedder damaged his throat in French wildfires, following their recent gig in Paris.

Pearl Jam had written that, “due to the extreme circumstances at the last outdoor site outside of Paris (heat, dust, and smoke from the fires) our singer Ed Vedder’s throat was left damaged”.

They also added, “He has seen doctors and had treatment but as of yet, his vocal cords have not recovered. This is brutal news and horrible timing…for everyone involved. Those who work so hard to put on the shows as well as those who give their precious time and energies to attend”.

On top of this, Pear Jam cancelled their scheduled gig in Prague a few days later.

“[Vedder] is continuing the treatments for his vocal cords, but unfortunately, there is still no voice available”, they announced.

With Vedder’s health failing to improve sufficiently, Pearl Jam were forced to cancel their show at Amsterdam’s Ziggo Dame.

Taking to Twitter, the band wrote, “In spite of continuous medical treatment, Ed is regretfully still without a voice and unable to perform tonight’s show at Ziggo Dome in Amsterdam”.

Adding, “This is again the worst possible scenario for the band”.

Pearl Jam also added, “We wholeheartedly apologize to all that worked so hard to put on the show and those supporters we looked forward to seeing […] Thank you enormously for your continued understanding”.

Pearl Jam are due to perform at the same venue tonight. Regarding that show, the band added that “All our energies will now be focused on having a show tomorrow”.

According to the band, Eddie Vedder has been recieving “continuous medical treatment”.

Following this gig, Pearl Jam are due to begin the North American and US legs of their tour in September. Check out their dates here.

Today In Music History – May 19th

WATCH The Killers Perform ‘Land of the Free’ With New Lyrics...