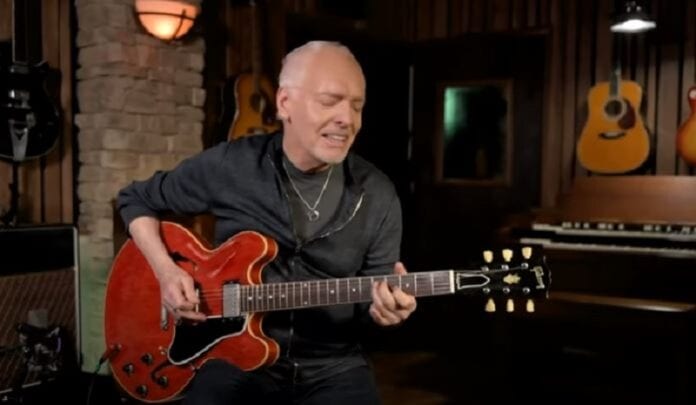 Peter Frampton and his band have released a cover of the Roxy Music classic hit ‘Avalon’ ahead of his brand new album.

‘Frampton Forgets The Words’ is an instrumental cover album that will be released on April 23 and is available to pre-order here.

Frampton and his band don’t stray too far from the original and his guitar stands in for Bryan Ferry’s vocals.

Speaking about the new cover in a statement, Frampton said:

“The original is such a perfect piece of music.I really wanted to get as close to the vocal inflection as I could, and I think I almost did it! It’s a sexy kind of guitar sound, like Bryan Ferry’s vocal, and I’m very proud of it.”

You can check out the cover below.

Peter Frampton’s new album sees him cover the likes of Lenny Kravitz, George Harrison, David Bowie and many more. You can see the full track list below and hear his cover of Radiohead’s ‘Reckoner’ here.

“This album is a collection of 10 of my favorite pieces of music. My guitar is also a voice, and I have always enjoyed playing my favorite vocal lines that we all know and love. These tracks are my great band and me paying tribute to the original creators of this wonderful music. So much fun to do, and I really hope you enjoy it, too” said Frampton.

The album, which Frampton recorded with his long-lost and recently recovered 1954 Les Paul Phenix, is the follow-up to his Grammy-winning 2007 instrumental record ‘Fingerprints’.

The guitar was said to have been destroyed in a plane crash in 1980 but was returned to Frampton in 2012.