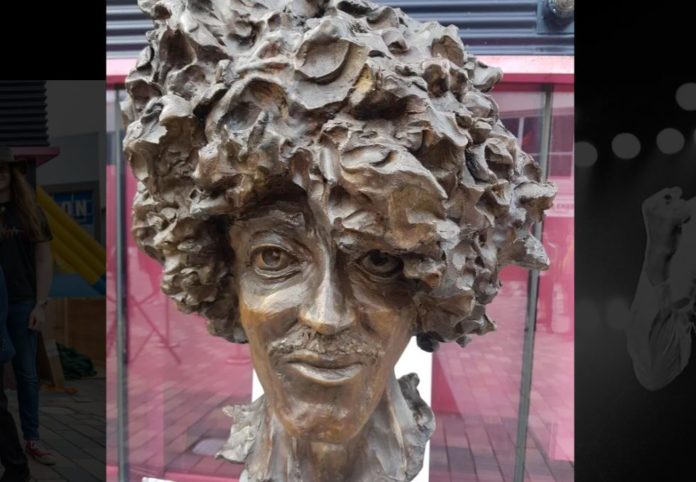 A superfan of Phil Lynott has said that he is shocked by the reaction to his sculpture of the late rocker.

Statue backer Sean Meaney said, “People love to put the boot in. We did the best we could”.

But trolls have compared the sculpture of Phil Lynott to Sideshow Bob from the Simpsons. They have also likened it to the Scousers comedy sketch from the Harry Enfield TV show.

One fan even said, “I’m not ­saying it’s a bad sculpture. I’m just saying if you put me upside down on the roof of an airplane with a blindfold on in a thunderstorm I could do a better one”.

Phil Lynott sculpture: “Never intended to be an exact likeness”

Meaney also blames some of the negative flack over the sculpture on the fact that it was unveiled in West Bromwich. He also feels it draws attention to the fact that one of Ireland’s most iconic stars was born in the UK.

It was also designed by local sculptor Luke Perry. The statue contains the engraving “Phil Lynott. Son of West Bromwich. Born in this town. 20th August 1949”.

Meaney had also previously campaigned to have a plaque built at the local hospital where Lynott was born.

“Phil’s hometown was Dublin but his birthplace was West Bromwich”, he said.

“The trolls attacking the monument in the last few days don’t like the fact but it was something Phil would tell people himself when he played in the Midlands with Thin Lizzy, but no one would believe him”.

“Philomena told me she had been presented with so many portraits of Phil over the years, some looked like him, some didn’t”, she said.

“She said it never mattered to her as they all represented Phil. Our own ­monument was never supposed to be a likeness of Phil”.

He also added, “I don’t know why fans get so angry but there are Thin Lizzy fans who think the statue of Phil in Dublin, looks nothing like him either”.

“I say whether it looks like Phil or not, it’s not doing Phil Lynott any harm, in fact it’s broadening his appeal”.

“My final world for all these knockers”

“My final word for all these knockers is simply this”, Meaney said. “Philomena Lynott, was a young, Irish, pregnant, without her family and completely alone in West Bromwich when she gave birth to a mixed race child in 1949”.

“There is now a monument to that child in the centre of West Bromwich. That to me is simply wonderful”.

Sean did admit that that he encountered difficulties to raise funds to pay for the bronze in the centre of West Bromwich.

“Nobody wanted to help us”, he explained. “The council wouldn’t fund it. So I started selling off my memorabilia”.

“What I found most touching is that other fans donated their memorabilia too to pay for the monument”.

U2 Release New App To Be Used At Their ‘Experience’ Live...