Home Music Photo: Drunk Fan Attempts To Swim Back In To Slayer Gig! 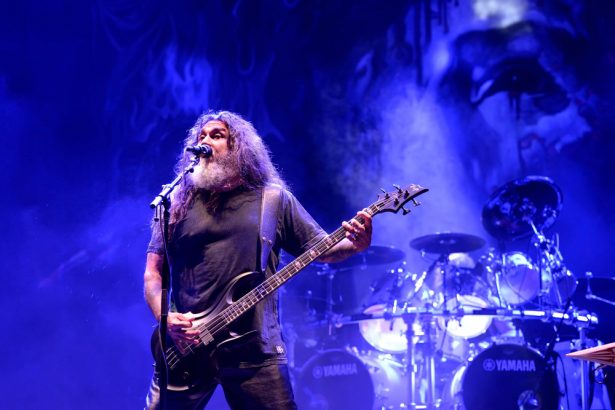 A Slayer fan has become an internet hero after attempting to swim back into a their gig after being kicked out. Chris LaRocque was at a show in Toronto which is part of Slayer’s final ever tour. Support is coming from Testament and Anthrax.

After getting drunk and proving to be a little too happy for ‘headbanging and moshing around a little bit’, security at the Budweiser Stage removed him from the venue during the opening act. LaRocque was having none of it and attempted to swim back into the venue.

Anthrax’s Scott Ian captured the moment on his camera.

Fan of the tour. He got kicked out and tried to swim back in. Swipe left! #commitment #allin #hypothermia

Speaking to Exclaim, LaRocque described his efforts, ‘I was a little inebriated, not like fall-down drunk or nothing, but I was feeling pretty good. I was worried about getting my junk in the water and freezing.’
He concluded, ‘I wasn’t going fast. I was just trying to be incognito. ‘I had my camouflage hat on, so I thought that might help.’

Meanwhile, Slayer recently announced UK and Ireland shows as part of their final ever tour. Dates are below.