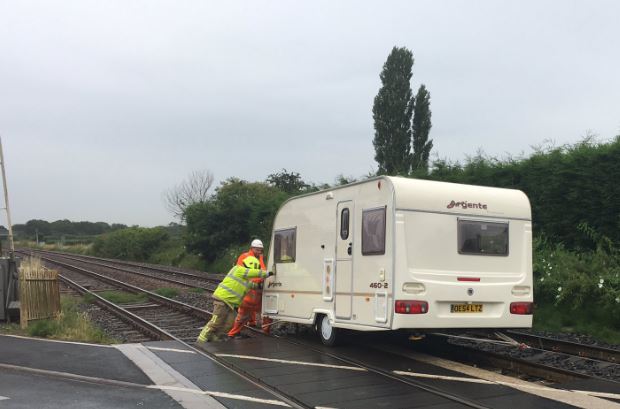 A caravan had to be removed from a railway line by the fire service in the UK.

That’s after it bounced off its towbar yesterday morning. Emergency services were called to the scene by Network Rail at 8.53am

The vehicle was being transported from Haxby, York when the bumps in the terrain caused it to totally detach from the car towing it. The caravan then hurtled around before rolling down the tracks.

The driver of the car and van continued down the road for 100 yards before managing to stop and calling emergency services.

“Network Rail put a stop in place and no trains came near the caravan during the incident. The caravan was winched off the tracks and back onto the road, where it was reattached to the car. The line was then checked for any potential damage, but there was none.”

#Huntington & #Acomb have attended an incident at #Haxby. A #caravan had become detached from a car and rolled onto the #railway lines.
All person safe and no trains were involved in the incident
Thanks to @NPTYorkcity @minsterfm @yorkpress @BBCYork pic.twitter.com/PBiAB2tRud