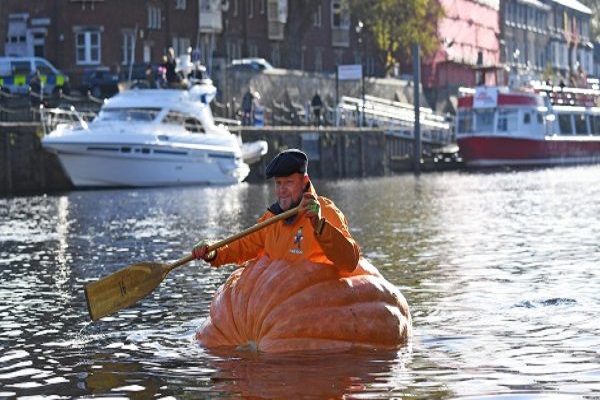 In the Uk, Tom Pearcy paddled a huge pumpkin down York’s River Ouse on Monday 29th of October. That was in a bid to break a new record for the world’s biggest pumpkin boat!

The pumpkin boat weighs more than 97 stone, the hollowed Halloween fruit was lifted into the river Ouse with a JCB. Tom, owner of the York Maze received cheers as he managed to sail the festive vessel between Ouse and Skeldergate Bridge.

According to The York Press, Tom claimed his voyage was a first,

“Roman conquerors, Viking invaders, medieval knights, Victorian industrialists and now tourists have all sailed down York’s River Ouse. But never in York’s 2000 year history has anyone ever rowed a giant pumpkin down the Ouse.”

Tom’s world record giant pumpkin boat will be brought back to York Maze where it will be on display during the York Maze’s Halloween festival!

It floats and is controlable (just). Waiting for @citycruisesyork to depart before heading to Skeldergate Bridge. @Yorkmaze Pumpkin Boat. pic.twitter.com/zycCkV1Njk

Your eyes didn’t deceive you if you saw this in York earlier @Yorkmaze https://t.co/mrn8kIqInH

We just want to say a massive thank you to the @CanalRiverTrust and to @yorkrescueboat, who kept us safe on the river when Farmer Tom sailed his World Record Pumpkin boat down York’s River Ouse!! 🎃🎃🎃 pic.twitter.com/y1IFVHOBON