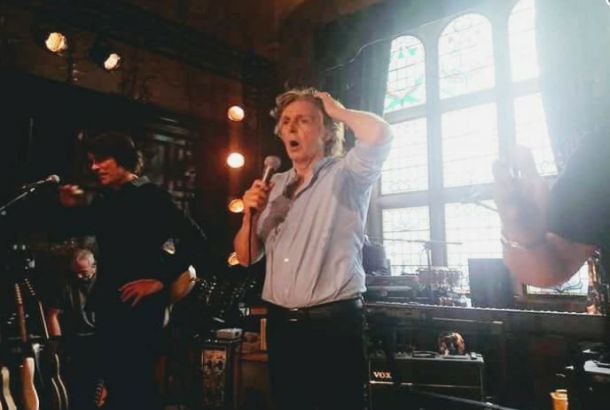 Paul McCartney performed a secret surprise gig for fans in Liverpool on Sat June 9th at Liverpool’s Philharmonic pub. McCartney had been spotted around the city with James Corden in the run up to the show. The two stars were seen taking selfies outside some of the city’s famous landmarks. One of which included the Beatles statue at the Pier Head.

Sir Paul McCartney is spotted in Liverpool! The Mac is back! ✌️ pic.twitter.com/ZpFkj2TRj4

According to The Liverpool Echo a television company SRO Audiences were giving locals the opportunity to be in the crowd at the Philharmonic for a secret show from a ‘global superstar.’ Taking to Twitter, fans shared their excitement, with one posting, ‘Not everyday you get to hear Paul McCartney singing all the Beatles songs with James Corden in a pub in Liverpool!!!!!!!! Feeling starstruck.’

Paul McCartney was in Liverpool today with James Corden, and did a ‘secret’ gig at the Philharmonic Pub! For full details see https://t.co/9nE1KU1Qqc pic.twitter.com/em066FiDaE

There has been no announcement as to when the footage of the gig will be made available, but fan speculation assumes that Corden’s presence could mean the pair were filming a clip for The Late Late Show. Just recently, Macca’s Instagram feed and profile picture has been removed, leaving his page completely empty. His Twitter profile picture has also been deeted, leading to rumours the Paul McCartney could be getting ready to release new music.

SO ME AND @Iadymccartney JUST STUMBLED ACROSS A SECRET PAUL MCCARTNEY GIG AND WAITED FOR HIM OUTSIDE
WHAT
THE
FUCK ALWNSKWNSKWNSJ#liverpool #PaulMcCartney #thebeatles pic.twitter.com/BkyHY5kmhv

According to the NME, Last month, McCartney was ordained a Companion Of Honour for his life long contribution to music. He is only one of a handful of musicians to receive the accolade, including Vera Lynn and opera singer Janet Baker. Other recipients include Stephen Hawking, J.K. Rowling and Dame Judi Dench.

Metallica Had Big Ambitions For The Black Album – Kirk Hammett