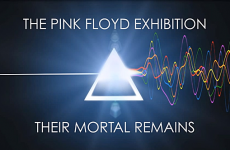 Roger Walters, Dave Gilmour and Nick Mason are working on a Multi-sensory exhibition which will aim to offer an insight into their career. The exhibition is due to open in Milan in September of this year.

The exhibition titled “Their Mortal Remains” is due to run over a week and will cover over 2’500 square metres of the former La Fabbrica Del Vapore factory in Milan.

Aubrey powell, curator, has assembled more than 300 artefacts from Pink Floyd’s  forty year history. The multi-sensory installation is being designed by the Stutfish company who have a history of creating stage sets for the band.

“If ever a band lent itself to a major retrospective exhibition, it’s Pink Floyd. Selecting what to include from such a treasure trove is both a dream and a nightmare. However, there were elements that just had to be included, for example a twenty-metre wide sculpture of The Wall, five-metre high inflatables, and of course, a flying pig”.
“We’ll be aiming for state-of-the-art visuals and sonic delivery, similar to the experience of attending a Pink Floyd concert; you’ll never know what to expect next.”

Tickets will be available to buy from www.pinkfloydexhibition.com

Janelle Monae Spoke About How Prince Has Influenced Her Music