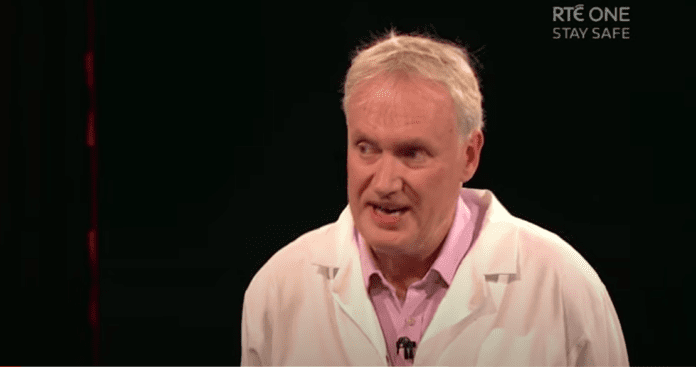 “A guy pulled me back by the collar. He started shouting and roaring all kinds of abuse at me. Anti-vaccine stuff”.  Professor Luke O’Neill explained to Claire Byrne last night about how he was once attacked in Grafton Street and received verbal abuse from an anti-vaxxer.

He also added that he has received considerable abuse from “anti-vaccine” people in recent months.

Professor O’Neill rose to fame over the past few months, following recent appearances on TV. The immunologist has said that this has brought negative attention.

“About two months ago I was walking down Grafton Street on my lunch break and a guy pulled me back by the collar. I got a fright, thinking what is this about. He started shouting and roaring all kinds of abuse at me. Anti-vaccine stuff”.

He also added, “I just kept walking and he stopped, but he gave me a fright, I hadn’t had that before. He didn’t come after me, thankfully, he just kept roaring and shouting”.

“That was assault. I got back to my lab and they said call the guards and report the guy, but I didn’t bother that was scary as I didn’t know what would happen next”.

This is not the first time that Mr O’Neill has been accosted in the streets. He also went into detail of other incidents that have ocurred.

“About a month ago I was on the DART and I was working as I was very busy and this guy again started shouting at me, across from me in the seat. I said, ‘I beg your pardon, I’m working’ and left”.

The scientist hailed a woman who jumped to his defence. “He came after me into the next carriage. A little old lady in her 70s came over and said: ‘leave Luke alone’ and he stopped. So she is now my bodyguard”.

Professor O’Neill also mentioned another incident where he was prevented from leaving a car park in Galway by “anti-vaccine people”, where he attended a conference. He also said they only “backed off” when he threatened to ring Gardaí.

Luke O’Neill said that he is more worried about younger scientists facing this type of abuse.

“I’m pretty long in the tooth so I wasn’t too worried about it but I worry about younger scientists getting attacked in this way. I think it is a sad development that these types of attacks are happening”.

Regarding the “anti-lockdown” protests of Grafton Street at the weekend. Professor O’Neill said that he understood people’s frustrations over Covid restrictions, but that “doesn’t justify violence” he added.

He also said, “I think people are frustrated. This is the worst part of the lockdown and people are fed up. That’s leveraged to bring people out on the streets and behave in that way. Then violence happens and the guards are being attacked. That’s very regrettable and I felt really outraged watching it on tv on Saturday”.