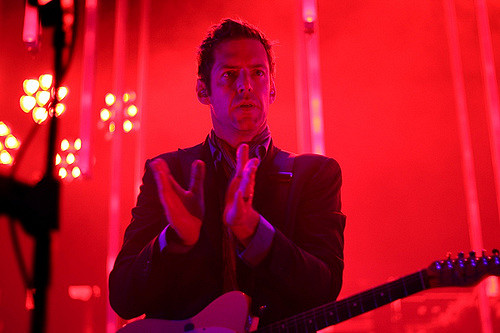 Radiohead guitarist, Ed O’Brien is set to release a solo album next year.

Speaking to BBC 6 Music, O’Brien said that the influence for the album came from when he went to live in Brasil for a year, “in February of that year, [I]  got taken to Carnival, and a really close friend of mine invited me and my wife to the Sambadrome in Rio. Oh, my god. It’s the greatest show on earth. Two nights, you have 12 samba schools. They’re like these processions, all these floats, and they have an hour and 20 minutes, each samba school parades down what’s called the Sambodrome, it’s like this mile long strip — they used it in the Olympics, and it runs from ten at night till six in the morning. It was the greatest thing I’ve ever, ever, ever experienced in terms of music. So of course, the beats, what they call the bateria, and it’s like all these polyrhythms.”

He continued, “Everyone sings. There must be 4000 people on each samba school who parade down there, and the combination of writing music and that feeling of being there and being like, ‘Oh my god, music can be like this.’ It was so profound, so it’s fed my whole inspiration and writing. There’s an element of that joy of music. But it also again, like, a lot of Brazilian music there’s a dark heart, melancholy, but, we’re all feeling this, we recognize it but let’s celebrate being a human being because that’s part of the journey for most of us. So that’s like a watershed in my life.”

In the interview, the guitarist also spoke about the session Radiohead had recorded at Jack White’s Third Man Records and why it was never released. He said, “I don’t know. It was alright. It was OK. I can’t really remember.” adding, “It was really fun. Jack was so hospitable, him and his engineer – he records everything on 8-track. Listen, it’s not worth waiting for. If anything was amazing, you can be sure – we’d try and put it out.”

Pearl Jam On The Road In The US