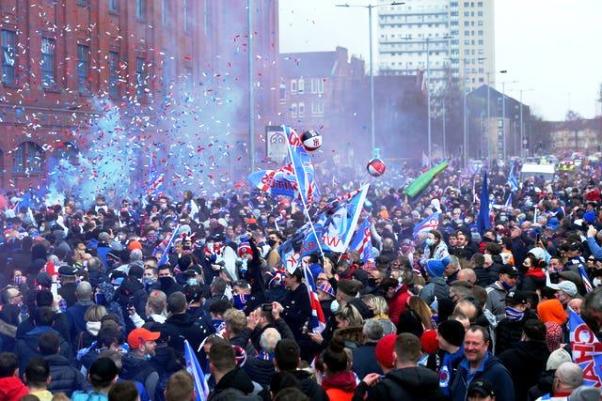 Police Scotland its expects a “number of arrests” to be made following “unacceptable” ‘anti-Irish Catholic‘ singing in Glasgow.

Footage on social media showed Rangers fans marching through the city centre attended by police on Sunday while chanting an anti-Irish song referring to the Famine.

Police Scotland Assistant Chief Constable Bernard Higgins said: “We did not facilitate this event and to say so is inaccurate.

“Officers on patrol came across this group as it was making its way through Glasgow city centre.

“Due to the numbers and to ensure public and officer safety, additional officers were called to assist and, at this point, individuals’ details were noted and the group dispersed.

“A retrospective investigation into this anti-Irish Catholic singing has been launched.”

The images of a mob singing anti-Irish racist songs, as they marched through Glasgow escorted by police, ought to be shocking but are shamefully all too familiar.
At the very least, we need an assurance that every identifiable person in that crowd will face charges.

Not sharing the video because it’s vile and I’m not platforming it, but just to say; racists have no place in Glasgow, Scotland or the world. Absolutely disgusted at the behaviour displayed yesterday.

Pressure group Call It Out, which campaigns against anti-Catholic bigotry and anti-Irish racism in Scotland, called on the Scottish government and Glasgow City Council to take action and to “start by recognising our community”.

The incident happened after Rangers beat Celtic 1-0 at Ibrox.