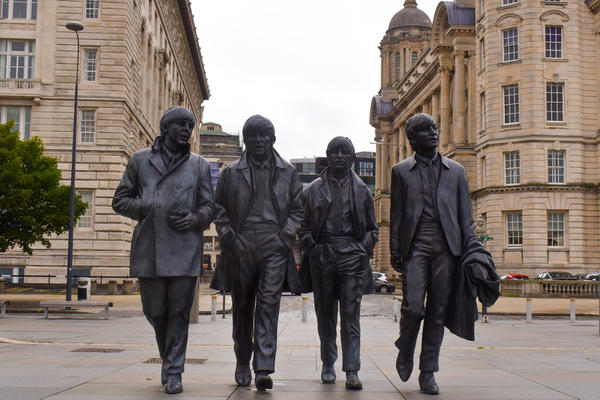 A selection of rare interviews with all four members of The Beatles is currently up for auction in the form of non-fungible tokens (NFTs).

The online auction began on Monday and is hosted by the Voices of Classic Rock Archive, which hosts hundreds of archive interviews and radio shows featuring classic rock artists.

The Beatles NFTs feature individual interviews with John Lennon, Paul McCartney, George Harrison and Ringo Starr. Each clip is delivered as a .WAV file and comes with a unique portrait of the related band member. Bids can be made at nft.vocr.org.

“The extensive variety of Beatles interviews that we have in our collection are, perhaps, our most comprehensive and valuable assets – that is why we wanted to launch with John, Paul, George, and Ringo – the ultimate Classic Rock Stars,” said Jonathan Firstenberg, managing director of the VOCR. “The owners of VOCR acquired this remarkable archive from its creator, Kathleen Wittbold, because they understood that there would always be future growth in the value of audio content for all things related to classic rock music. All of the interviews contained with VOCR are unique, and, like any other important and unique object or artwork, they will continue to grow in rarity and value over time.”

The archive of The Beatles’ road manager Mal Evans is to be opened to the public for the first time, with an authorised biography set to be published in 2023. This will be followed a year later with the release of a compendium of Evans’ archives, including diaries and manuscripts.

The biography will be penned by Beatles scholar Kenneth Womack, who has been collaborating with Evans’ estate.

Evans had received The Beatles’ approval to release his archives, but he died in 1976 at the age of 40 before he could do so.

“My dad meant the world to me,” he said. “He was my hero. Before Ken joined the project, I thought I knew the story of my dad. But what I knew was in monochrome; 15 months later it is like The Wizard Of Oz (dad’s favourite film) because Ken has added so much colour, so much light to his story. Ken has shown me that dad was The Beatles’ greatest friend. He was lucky to meet them, but they had more good fortune with dad walking down the Cavern steps for the first time.”

Interest in The Beatles has grown in recent weeks with the release on Disney+ of The Beatles: Get Back, an extensive documentary from director Peter Jackson that details the recording of Let It Be.