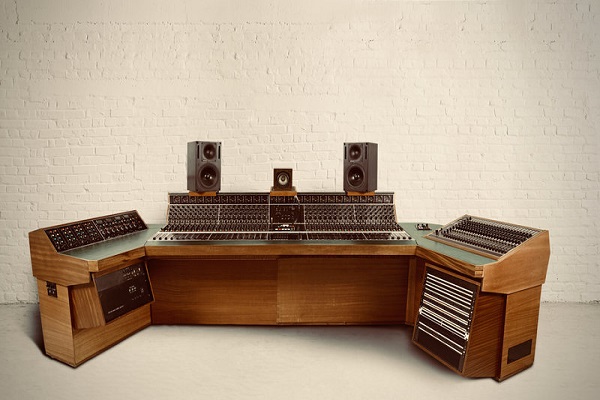 Led Zeppelin, David Bowie, and Bob Marley are some of the iconic artists who laid down tracks on the HeliosCentric console. The legendary mixing console is to go up for auction next month at Bonhams, in London.

According to Atlas Obscura, the console in its current formation, ‘is a composite of two historic recording control centres, both designed by Helios Electronics.’ These desks would have seen action in the 1970s and were used on some landmark music recordings.

Following years of dormancy, the two units were combined as one back in the 1990s. The console is still in full working order, and according to Bonhams specialist Claire Tole-Morris is due to fetch a six-figure sum when it goes up for auction. The older section of the HeliosCentric dates back to 1970, and resided in Island Records’ Basing Street Studio 2, in West London, until halfway through that decade.

The desk’s time in the west London studio saw it used by a number of artists. It was used by Cat Stevens who recorded “Peace Train,” the Rolling Stones worked on “Angie,” and Bob Marley and the Wailers recorded “Get Up, Stand Up” and “I Shot the Sheriff.” Stephen Stills also utilised the HelioCentric to record his self-titled debut solo record in 1970. That was the only record ever to feature the guitar work of both Jimi Hendrix and Eric Clapton.

However, the most notable claim to fame for the unit has to be its use during sessions for Led Zeppelin’s untitled fourth record, released in 1971. Although most of that record was produced in the Rolling Stones’ mobile studio, the original work started at Basing Street in December 1970.

That’s where the band completed most of “Stairway to Heaven,” and Jimmy Page then revisited the studio months later to record his famous climactic guitar solo, ensuring the console’s place in rock history early in its career.

The other half of the HeliosCentric is comprised from part of the console that was found in Alvin Lee’s personal studio between 1973 and 1979. Lee was the guitarist and vocalist for the band Ten Years After. He worked during that time with collaborators such as George Harrison, Mick Fleetwood, and Ronnie Wood.

In 1996, Elvis Costello and Chris Difford of Squeeze oversaw the combining of the two consoles when they conceived HeliosCentric Studios in the small English town of Rye. Time will tell if this piece of recording history will surpass the EMI TG12345 MK IV, which is the desk that Pink Floyd recorded Dark Side of the Moon on. Bonhams sold that in 2017 for $1.8 million.