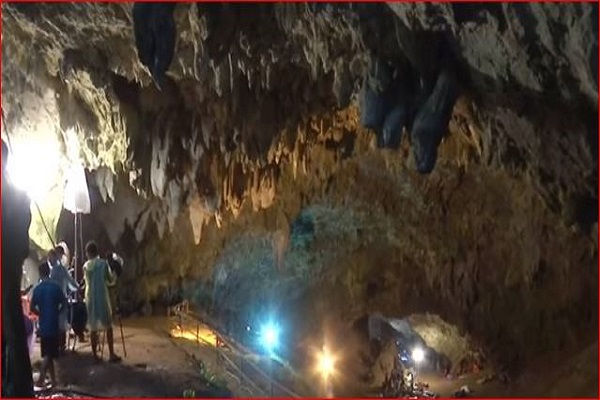 It could be months before a group of boys and their football coach can be freed from a huge network of caves in Thailand. Authorities are keen to free them as quickly as possible – but flooding means it’s dangerous to get them out. 10 days after they went missing yesterday came the breakthrough with rescuers finding the group alive. The boys aged between 11 and 16 and their 25 year old coach were weak, but had only minor injuries.

But getting them out is dangerous because of the deep water that trapped them in the first place. They’re being provided with four months’ worth of food and being taught how to dive. However Thailand’s interior minister has warned the rescue operation must speed up before more rainfall makes flooding there worse.

Speaking to NBC news, Rescue worker, Ben Reymenants, pushed for the option pumping water out of the cave, ‘They can’t swim, so they definitely can’t dive…The easiest [option] would be that they [people trying to rescue those in the cave] keep pumping the water out of the cave. They need another three or four feet so they can literally float them out with life jackets, but time is not on their side. They’re expecting heavy thunderstorms and rain which might flood the entire cave system, making the rescue impossible at that stage.’