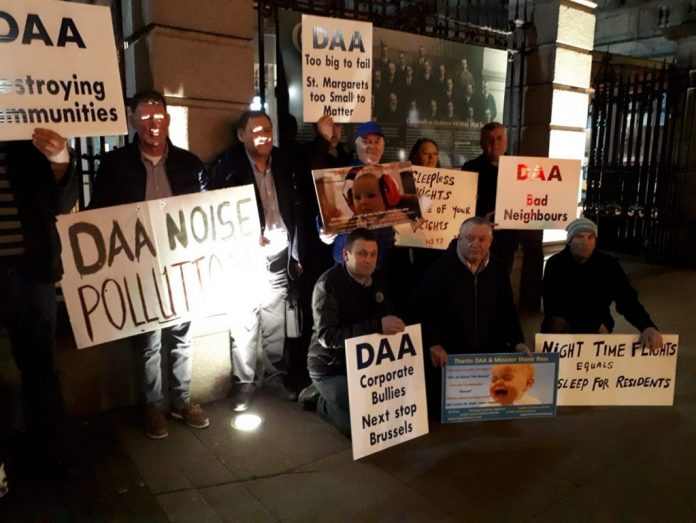 Construction work on the second Dublin Airport runway commenced yesterday but residents have expressed fears over noise pollution. The Taoiseach and Transport Minister Shane Ross turned the sod on the €320million project decades after it was proposed.

It’s reported the new 3.1km runway will be funded without State cash by the Dublin Airport Authority. Mr Ross claimed the project would allow the hub to keep bringing in huge numbers of foreign visitors.

Irish construction firm Roadbridge won the main contract and over 300 workers will be on site during the two-year build. Protesters argue the runway will bring “unbearable” noise pollution to the surrounding area.

Sheelagh Morris, from the St Margaret’s Concerned Residents Group, believes the worries of homeowners have been overlooked.

“We are here at the turning of the sod of the new runway because we are appalled after coming from protesting at Dail Eireann last night to hear that DAA are going to be dealing with Fingal County Council with regards to noise regulation.”

The local authority has been chosen to oversee noise levels by the Government. Ms Morris continued that the “DAA are applying to have night-time restrictions overturned which is going to have massive impacts on our homes. Our homes will be deemed worthless and we won’t be able to live here.”

According to the Irish Mirror, the Taoiseach made assurances that no one had been ignored. He also said that those who sold their land received a 30% premium and people who chose to stay were receiving grants and support to insulate and soundproof homes.